This photo captures a wonderful classic uniform, including short-billed cap, bloused pants, striped socks, jersey piping, and bear-in-the-C Cubs logo. When teams host throw-back nights, this is exactly what I hope to see on the field. 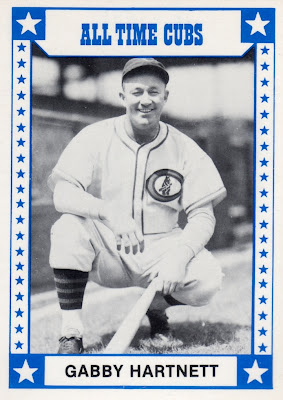 Card front
HOF backstop Gabby Hartnett hit well for a catcher and played stout defense, an ideal combo for any lineup. He frequently garnered MVP votes and finally won the NL award in 1935, at age 34 (!). There can't be many catchers who give their strongest seasons after 30; even "Young Pudge" Rodriguez won his MVP at 27 and "Old Pudge" Fisk never finished higher in the voting than 3rd.
Gabby also appeared in 4 World Series for Chicago, once every 3 years from 1929 through 1938, the last as both catcher and manager. That decade marked their second-strongest era, trailing only an amazing 4 pennants in 5 years from 1906 to 1910. (See my 1970 Fleer World Series #5 and 1971 Fleer World Series #5 profiles for more.) 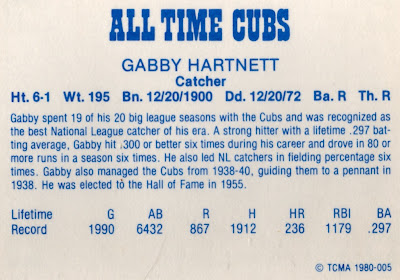 Card back
As the bio notes, Hartnett spent one year (his last) away from Chicago, catching part-time and pinch-hitting for New York's baseball Giants in 1941. He could still hit and catch, logging a 119 OPS+ and .994 fielding % in 34 games, but they released him at year's end.
Here's the 12-card checklist, with 8 position players, 3 pitchers, and a manager (3 time pennant-winner Charlie Grimm).
Note that Grimm also player-managed for Chicago from 1932 to 1936, preceding Hartnett's 3 years at the helm. Charlie went on to serve a second stretch from 1944 to 1949 and took them to the infamous "Curse of the Billy Goat" World Series in 1945.


Value: Singles run a dollar or two, as with other TCMA All-Time sets, and I expect HOFers like Hartnett and Banks to cost somewhat more.
Fakes / reprints: Don't expect to see any in the market, given the set's low profile and value.
Posted by Matthew Glidden