For most of the late 1940s, California's Remar Baking Co. produced annual team sets for Oakland's Pacific Coast League team, the Oaks. In 1947, they doubled up with Smiths clothing store, as both companies distributed similar 25-player collections. 60 years later, these cards are about all that remains of both companies, other than some photos and one factory building! 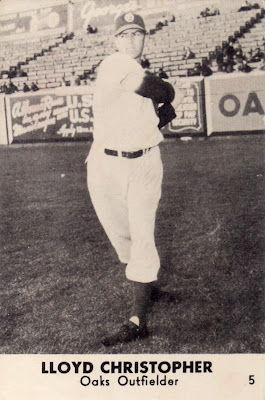 Card front
Smiths sets feature these black-and-white fronts, with photos taken at their home field, Oaks Park. Oakland fielded a title-winning team in 1948, but history better remembers their manager, Casey "The Old Perfessor" Stengel, who later captured 7 World Series helming the Yankees. (Find a ton of info about Casey and his team at the Oakland Oaks of 1948 page.) 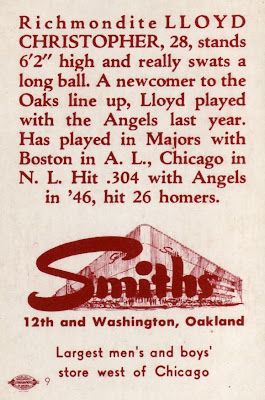 Card back
Speaking of Oakland managers, Chuck Dressen took over the Oaks when Casey turned his 1948 PCL title into a job with the Yankees. Mr. Dressen won his own championship in 1950 and immediately jumped to the Dodgers for 1951. These former Oaks-men proved so successful in New York and Brooklyn that they met for two World Series (1952 and 1953), with Stengel taking both.

Value: Lloyd Christopher cost me ~$5 on eBay. Casey Stengel and Billy Martin are the "stars," so run several times more.

Fakes / reprints: Haven't seen any reprints of Smiths cards in the marketplace.
Posted by Matthew Glidden