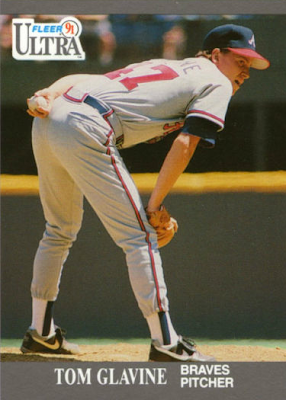 I owned this 1991 Ultra #5, a glossier set Fleer produced to compete with Upper Deck's surge of photo-driven market success. Designers put no less than four different poses of Tom onto this one card, showing off several stages of his delivery and multiple uniform combos. Too bad the orange background gradient makes it look so dated! 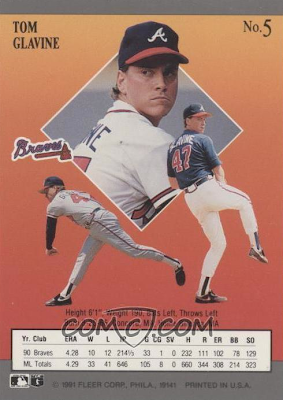 Fleer upped their game in 1993 with a dedicated Glavine highlights subset (including this #5) and he rewarded collectors with a 3rd-straight 20-win season (career stats). 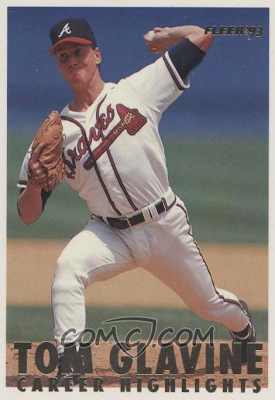 It feels weird in retrospect for a 27 year-old guy with barely 60 career wins to receive a dedicated subset, but Atlanta rode high during that Ted Turner era of Maddux, Smoltz, Glavine, and TBS. The junk wax era meant tons of product, so stars served double or triple shifts on cardboard. 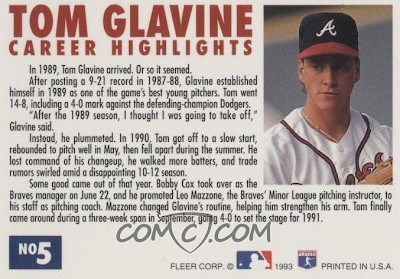 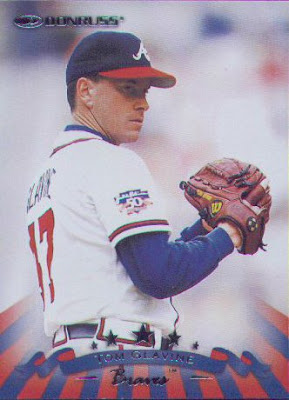 Donruss matched Atlanta's team colors well, thanks to the team's taste for red, white, and blue. So glad it wasn't teal and tangerine. 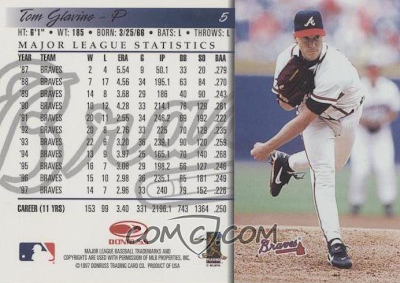 Let's look at some Hammerin' Hank cards to mark my blog's 755th post, one of baseball's transcendent numbers. Aaron's inseparable from 755 and Ruth has 714. I wonder if future generations will similarly remember Barry Bonds for 762. You know, the home run record? I had to look up how many he hit, so maybe not. (Would've guessed 765.) 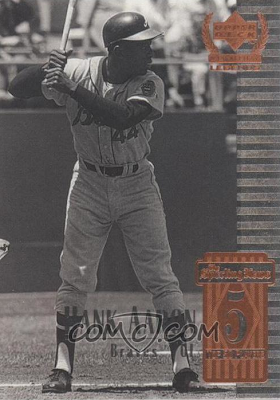 Hank hit #755 off California's Dick Drago on July 20, 1976, adding cushion to Milwaukee's 6-2 win. He played sparingly in August and September that season without adding another homer, but collected his last hit, an RBI single, in his last game (Oct 3). 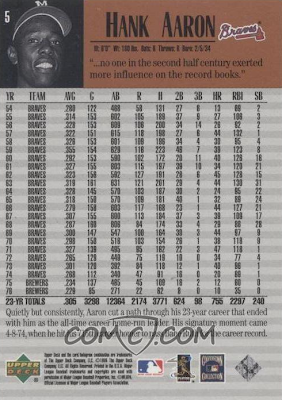 Aaron drew 35 walks and knocked in 35 runs in 1976, his 23rd and final season. He managed at least as many BBs as RBIs three times, all after the age of 38, showing that Hank's eye stayed sharp even as that iconic swing lost its power. 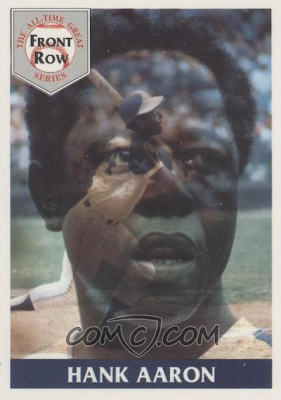 This hybrid swing and portrait is not the most attactive baseball card you'll see today. 1992 Front Row's known for some big rookies in its 100-card Draft Picks series (full checklist), particularly Derek Jeter, but ran several subsets of vintage players that included Hank Aaron the same year. Sorry, but those fonts and logos haven't aged well.


In March 2013, Topps locked up the exclusive right to print MLB-licensed cards through 2020, a stark contrast to the wide-open field of companies trying to print cash for themselves in the early 1990s. As much as I bristle at the thought of a card "monopoly," Front Row's fast-break approach to design (and accompanying over-production) says something valuable about making companies put real work into their stuff. At least this #5 picked an interesting HOF induction speech excerpt for Aaron's back text. 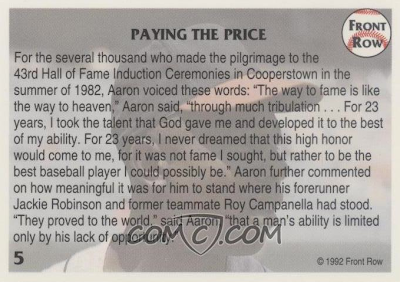 The "former teammate Roy Campanella" line caught my attention, but they mean Jackie and Roy here, not Hank and Roy, as Campy was winning MVPs in Brooklyn by the time Aaron reached pro ball in 1952 (minor league stats).

Value: HOF or not, you should be able to find these #5s for $1 or less. Check Out My Cards offers several for around 50 cents.

Fakes / reprints: I assume that Jeter card's been faked or reprinted several times, but the Aaron cards are probably safe from counterfeiting, thanks to early 90s overproduction.
Posted by Matthew Glidden No comments:

Here are the favorite Twins cards chosen by entrants to 2013's first Opening Day Giveaway. (Five in all, so appropriate!)


Gcrl: Jim Kaat at the bat, Jimmie Hall's rookie trophy, and the Pohlads


That Jim Kaat card's also a favorite of mine. Something ineffably "vintage baseball" about a great pitcher batting during the last year before DHs.

I tossed the names into a hat...drew one of them...and...congrats to Superduperman99! Please send your mailing address via my contact link and those Twins will head your way.

Thanks to all who chimed in, we're three days even closer to first pitch!
Posted by Matthew Glidden 1 comment:

Been way too long since I sent cards out the door. Let's count down to opening day with a Minnesota giveaway! 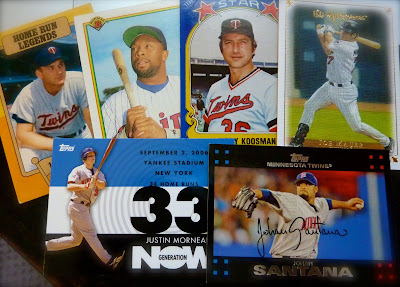 WHAT YOU WIN: There's a couple dozen in all from 1980 and up, including the handful of highlights above.

WHAT TO DO: What's your favorite card of a past or current Twin? (Pre-1961 Senators also in play, if you're a fan of Walter Johnson or young Harmon Killebrew.) Name it or link it in the comments and I'll randomly grab a winner from there. Cutoff for entries is end of the day this Wednesday, March 13.

UPDATE: The winner was Superduperman99! Thanks to all entrants.

This is my third look at a numbered 1971 Bazooka Yaz card--first discussed here and followed up here--but this time it's a real one. Probably real. I mean, its eBay lot includes a bunch of other numbered cards and that's about the best you can do when collecting rare test sets unless it came directly from the Topps archives.


Finding a buyable version of a type card that's eluded me for years (and required the return of a fake) made me feel like Tim McCarver. 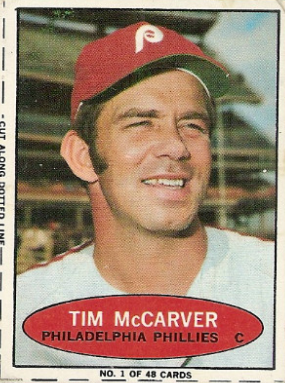 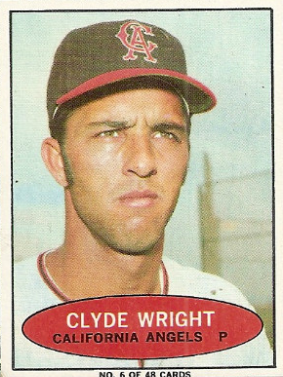 Sorry Yaz, we're destined to remain apart for awhile longer. Guess I'll continue to watch-list you from afar. (At least you can use the listing's scans to enjoy almost the entire set: there's 45 of 48 cards or 15 of the original 16 three-player panels.)

UPDATE: The seller relisted for $1399! Who knows where this pricing adventure will end. 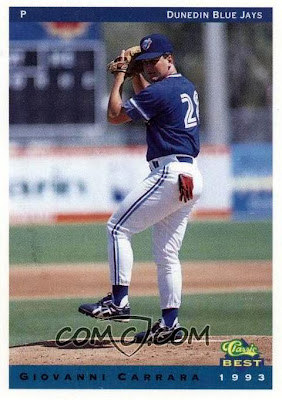 This photo of Giovanni's A-ball duds--Dunedin played in the Florida State League--includes a splash of red from his batting gloves, a rare touch for cards of guys in a windup. It's likely from spring training, so the photographer might've pulled him off warmups or the batting cage to get his shot. 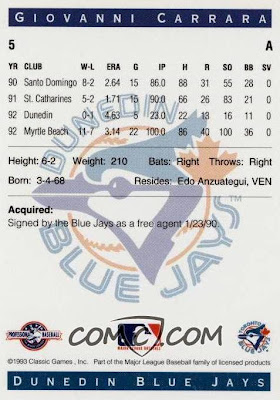 Classic included Giovanni's 1990 and 1991 winter league stats for this #5, a practice seen on many minor league sets to avoid showing nothing at all. He pitched in Venezuela during MLB's off-season for 24 years, setting that league's mark for durability. Carrara went on to pitch professionally on 4 continents, appearing in both the 2006 World Baseball Classic for Venezuela and multiple European Championships for Italy (career summary).

Few of the 30 players in Classic's Dunedin checklist reached the majors. Besides Carrara, the best-known are Paul Spoljaric, Chris Stynes, and 1960s pitcher Bill Monboquette (as a coach).

Fakes / reprints: I rarely find reprints of minor leaguers and find it hard to believe 1990s Classic would be vulnerable to counterfeiting.
Posted by Matthew Glidden No comments: