This post tracked progress on a Good-to-VG set of 1957 Topps. Like many OBC members, I started with a low-grade, Poor-Fair set, and later upgraded to "intact," with no paper loss, trimming, writing. eBay supplied my last upgrade hit in #295, Joe Collins, a Yankee from the scarce mid-series.

Want to know more about the set itself? 1957 marked several formative steps for Topps, who continued to set standards for what "baseball card" means today. 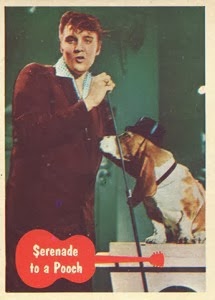 Full-color photos from the Elvis set also made their way to Topps baseball in 1957.


Bowman attempted a full set of photo-color cards in 1953, but reverted to hand-tinted sets for 1954 due to high printing costs. Topps stuck with hand-tinted player images through 1956, then switched to color photos from 1957 on.

Many Topps issues from the 1950s and 60s have a run of lesser-printed cards, typically the "high numbers" released near the end of each season. They expected lower sales during this period, as many fans would switch to non-baseball interests, or at least buy different trading cards with their gum money.


1957, on the other hand, is sparse in its next-to-last series (#265-352). I assume that either A) earlier series undersold Topps' expectations, leaving less money to print this run, or B) mid-series printing problems required removal of a bunch of sheets prior to packaging. Either way, you'll spend more tracking down those 88 cards than any others in the set.


Brooklyn said goodbye to its Dodgers after 1957. My favorite parting shot is this multi-player card starring four of their biggest names.

Topps took the novel step of adding a date-specific contest to packs shipped from May to July, offering prizes in exchange for correct game score predictions.


The dated contest cards (May 4, May 25, June 22, July 19) aren't well-known to the average collector, but hint at how often Topps shipped new products to their distributors and retailers. Many kids must've mailed in these promos, because few remain in the hobby today. 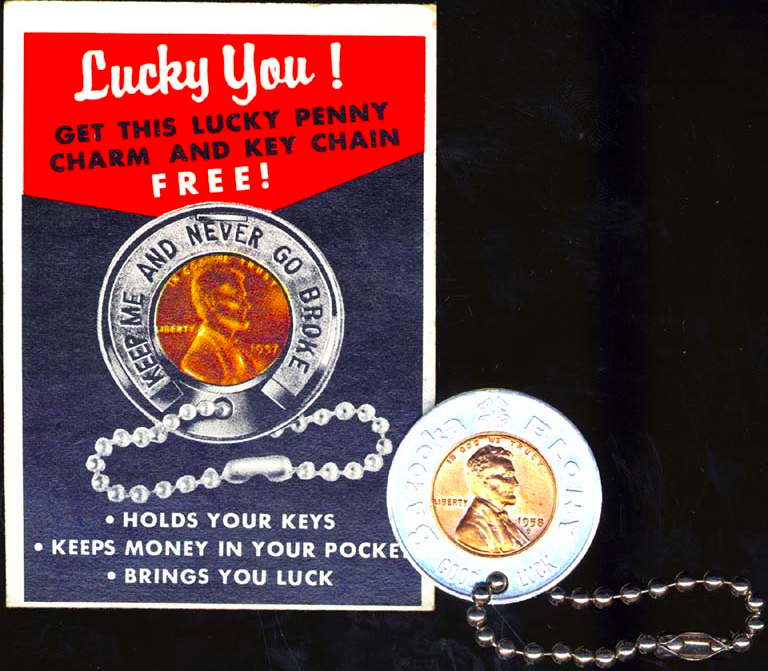 Most collectors don't pursue a lucky penny keychain card when building 1957 baseball, but it did come in that year's packs. Topps added this scarce oddity to several sets from that year, including football and non-sports issues. (Based on eBay searches, it sells for several thousand pennies these days!)

OldBaseball.com friends TJ Valacak, Wes Shepard, and Lynn Miller have all helped with upgrades. Thanks, guys!

Feb 2: Here are a half-dozen recent pickups from eBay. Kaline's off the upgrade list!

Sept 6: Made some upgrade hits at the 2014 National in Cleveland and grabbed this sharp-cornered Art Ditmar off eBay for $1.75. 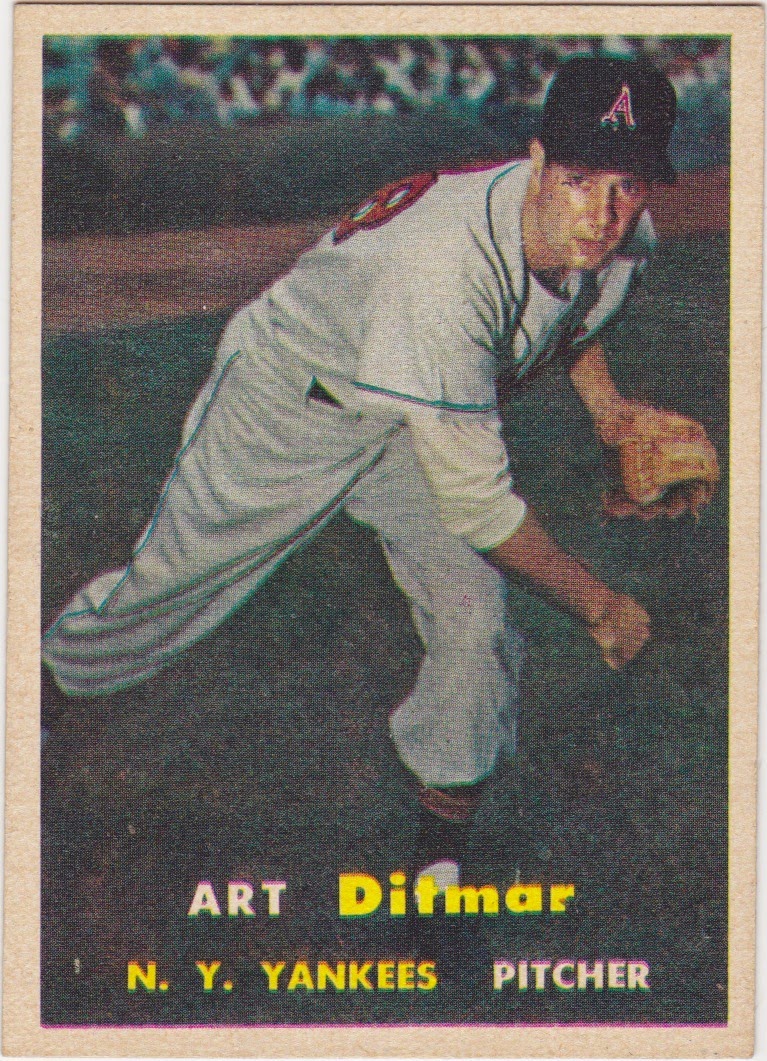 Ditmar's wearing a KC Athletics cap, reflecting one of the many players shipped between KC and NYY in 1957. The kickoff came on Feb 19 and the teams took until June to tie up its loose ends, quoted from Art's transactions page: 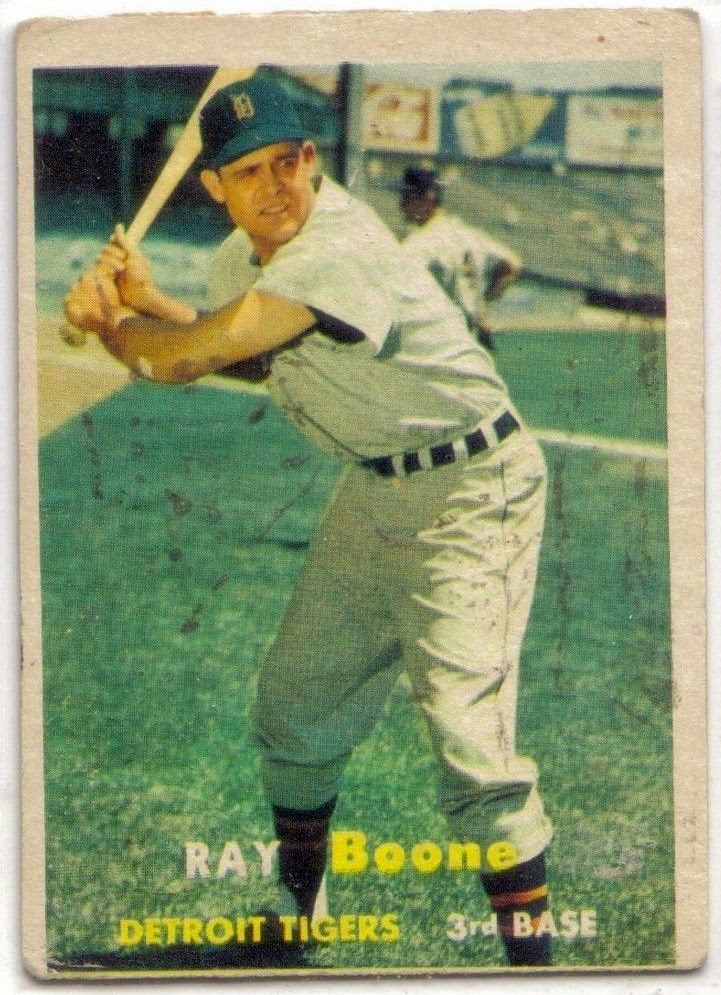 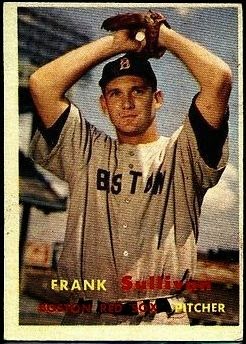 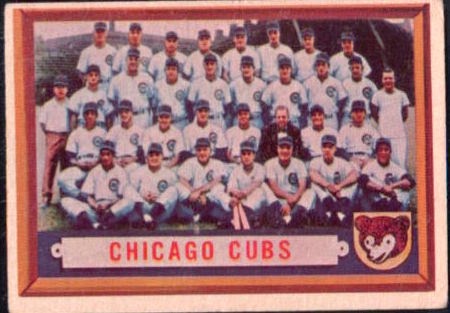 1957's Cubs finished two games better than 1956's Cubs under the first-year tutelage of Bob Scheffing. Despite a gradually improving W/L record, he never broke .500 and Chicago lost patience, parting ways with Bob after 1959. Detroit picked up the still-young skipper for 1961, where Scheffing won 101 (!) games in his AL debut, missing the pennant only because New York won 109. 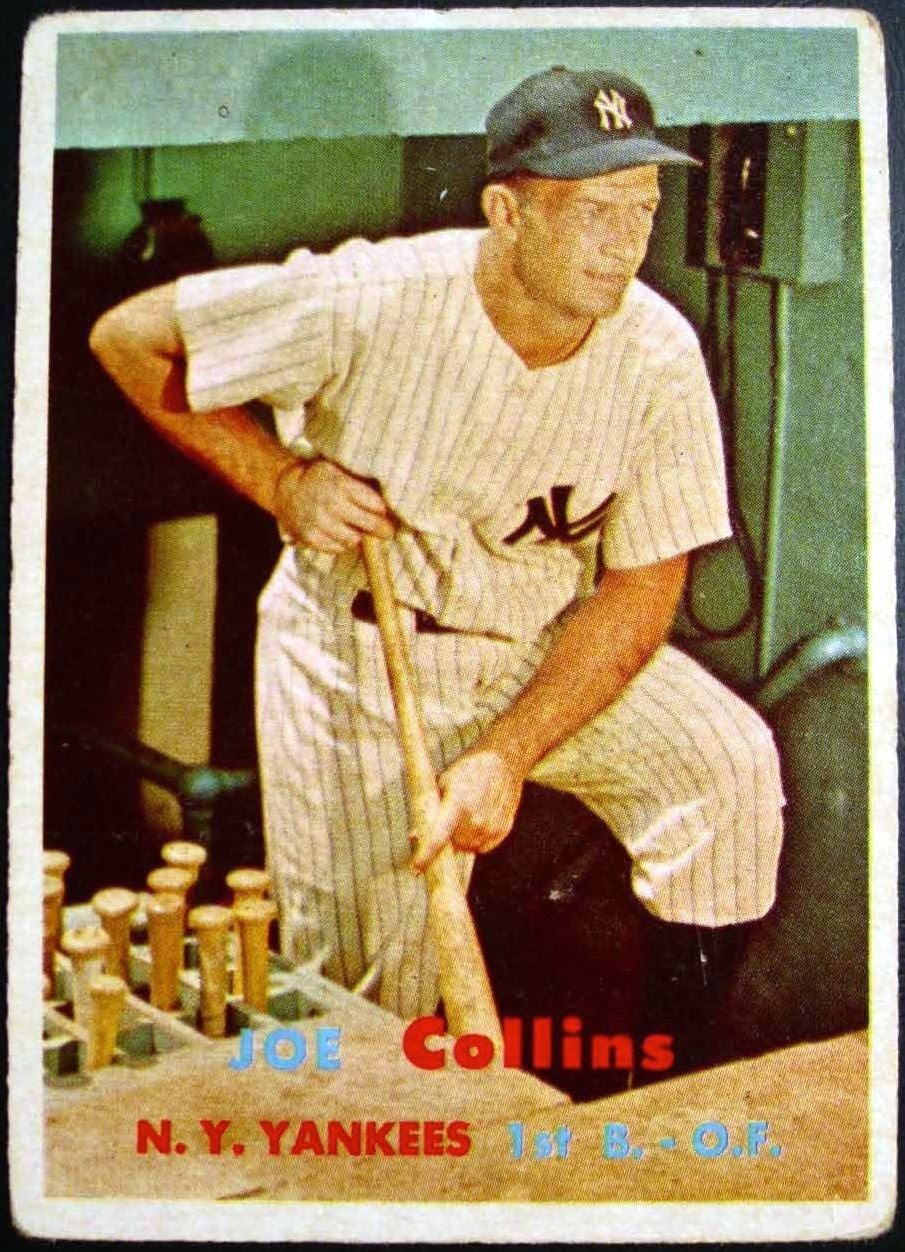 Joe Collins slugged two homers in game one of the 1955 World Series and here's a great shot of Duke Snider leaping for the second. 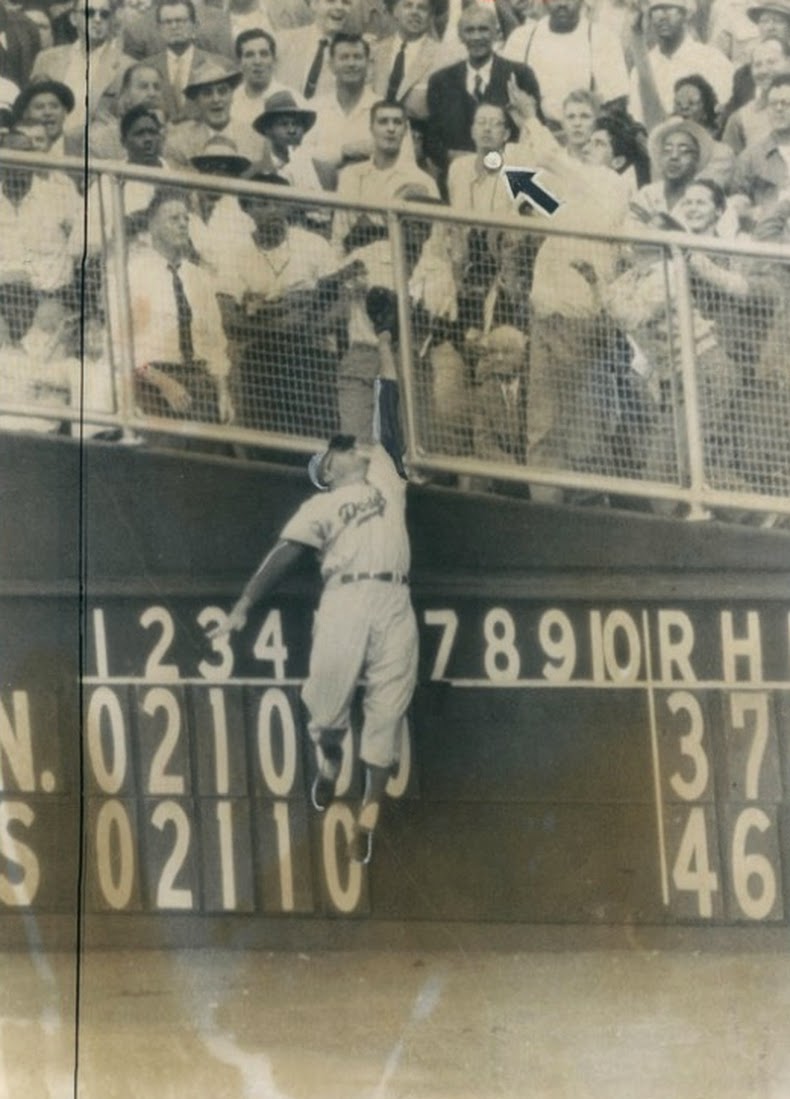 New York won the game one battle, but lost the war to Brooklyn in seven games. (It's still amazing to me that the Dodgers left town just two years later.)
Posted by Matthew Glidden No comments:

We're not done looking at my incoming wave of British cigarette type cards, not by a long shot. This time, I'm including recent arrivals from Aaron, another friendly trader in OBC. All five of these #5s come from 1920s tree and flower-based sets.

These artsy sets feature their own hand-drawn horticultural charm, but there's no way I'll ignore the baseball connection from their "biggest" example: Ash. 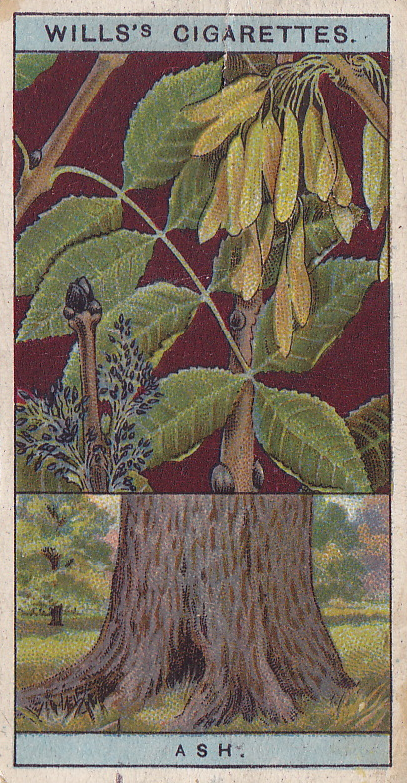 If you're a fan of our pastime's materials and technology, check out "Maple vs. Ash & More: Which Wood Type for Baseball Bats?" That article's more throught-provoking that the back of this #5, which reads like a Wikipedia page of italicized plant parts. 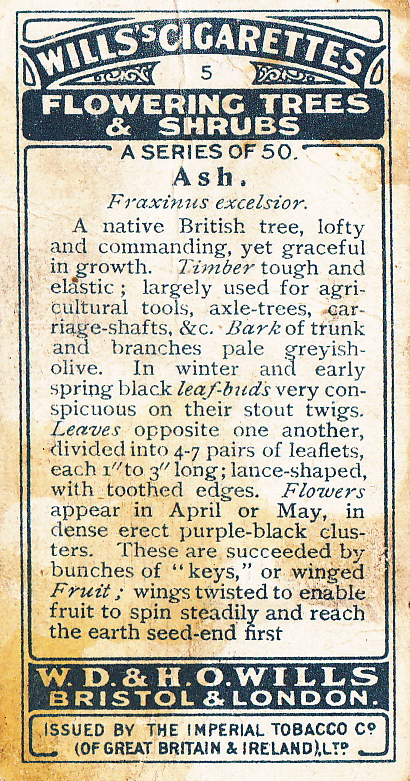 That linked article also calls out bamboo as a top modern material, one I'd never considered for that purpose. Bamboo's easier to grow and regrow, but must be layered with composite glue to reach the proper thickness, so it isn't the "single piece of wood" mandated by current MLB rules. Our league will need to unravel a ton of regulatory red tape before pro hitters can heft a stick made of bamboo or any other "new" material.

Checklists for today's five #5s, four from 50-card sets and one from a series of 25.

That 1923 Player set calls its #5 a "plant hypocrite," but I think each day is a struggle for existence, so hey, let's give those hard-living plants a break. It's a weed-eat-weed world out there.

Thanks for all the flora, Aaron! Readers can look forward to another round of exotic tobacco cards soon.

Value: British cigarette cards proved so popular that modern supply exceeds popular demand, so prices remain low. You can find complete sets for $25 and singles for $1.

Fakes / reprints: Many 1920s and 30s cigarette sets went through one or more reprints after 1990. Look for a "reprint" tag or glossy, thinner paper stock on the modern versions.
Posted by Matthew Glidden 3 comments: