When Wheaties starting signing players to endorsement contracts in 1934, they certainly hoped for a future where their cereal and "sports" went together in the public consciousness. And here we are, with "better eat your Wheaties" and "Breakfast of Champions" still commonly-known phrases in the 21st century. 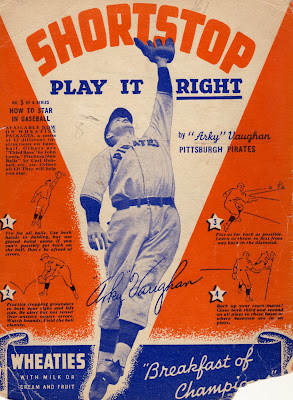 Card front (click for detail)
Today's set of box back panels includes positional playing tips, highlighted by this leaping shot of HOFer shortstop Arky Vaughan. This takes nothing away from Arky's hitting, which peaked at .385 (!) in 1935 and remained above .300 for 12 of his 14 seasons.

Everyone on this checklist made the HOF, save Zeke Bonura and Buddy Lewis. Wheaties usually featured established players, so that's not surprising--Zeke and Buddy were just young players who couldn't turn their early good performance into long-term success.

Value: Low-grade panels like Arky run about, oh, "this much." (Picture hands held $10-15 apart.) Complete boxes cost many times that, being exceedingly rare.

Fakes / reprints: Haven't seen any faked panels in the marketplace, but be wary of buying superstars like DiMaggio unless you're already familiar with Wheaties issues.
Posted by Matthew Glidden