Happy 45th birthday to the much-traveled Matt Stairs, native of New Brunswick, Canada and one of a handful of guys to suit up for at least a dozen MLB teams (13 in all), his career nicely bookended by Montreal in 1992 and Washington in 2011, two versions of the same franchise. By coincidence, they're also the only two teams he didn't homer for (career stats). 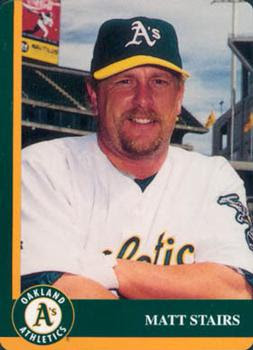 Stairs holds the record for most pinch-homers (23), breaking the mark of 20 held by similarly well-traveled slugger Cliff Johnson (career stats) in 2010. He hit 11 of those pinch-homers from 2008 to 2010, becoming a sort of late-game, anti-relief specialist. 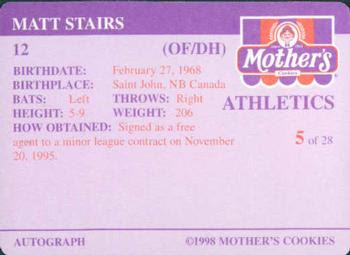 Oakland-based Mother's Cookies first made baseball sets in the pre-expansion 1950s and featured Pacific Coast League teams (1952 set profile). They returned after a 30-year absence with MLB team sets in the 1980s and were one of many to capitalize on the late-80s Bash Brothers' success (full set list). I still own several 1980s Mariners team sets, giveaways from Seattle's annual "Baseball Card Day."

Fakes / reprints: Mark McGwire and Jose Canseco were both targets for fakes at the height of their popularity, but I haven't seen any counterfeit Mother's Cookies in the marketplace.
Posted by Matthew Glidden No comments:

Just over a century since future ballpark staple "Take Me Out To The Ballgame" swept America in 1908, no snack connects to game day like Cracker Jack. I've seen its caramel-popcorn-nut boxes in every pro park and expect sales to continue as long as there's baseball to play. (Yankee Stadium tried to replace it with Crunch 'n' Munch in 2004--fans rebelled and Cracker Jack quickly returned.) 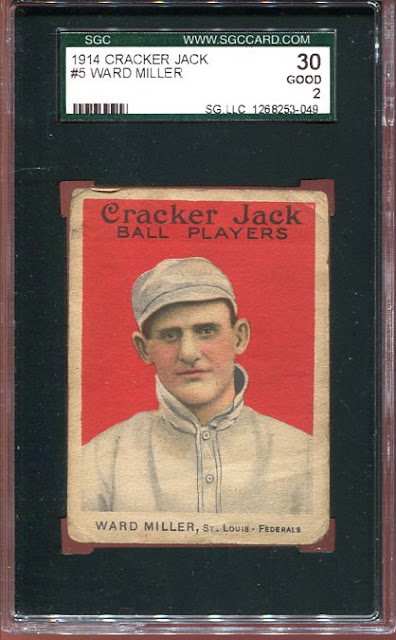 Back when Cracker Jack itself was young, the company cemented its baseball popularity with consecutive, near-identical sets of AL, NL, and Federal League stars: 1914 (144 cards) and 1915 (176 cards). That era's business and wartime context made them significant beyond being "just" 100 year-old cards.


Christy Mathewson's already one of the key cards, but his pose change rates as the sets' most significant variation.


Card backs give a player bio and determines whether a given card's 1914 ("set of 144") or 1915 ("set of 176"). The "Three Eye League" mentioned on Miller's card was a minor league of teams from Iowa, Illinois, and Indiana, and fielded good talent for several decades. 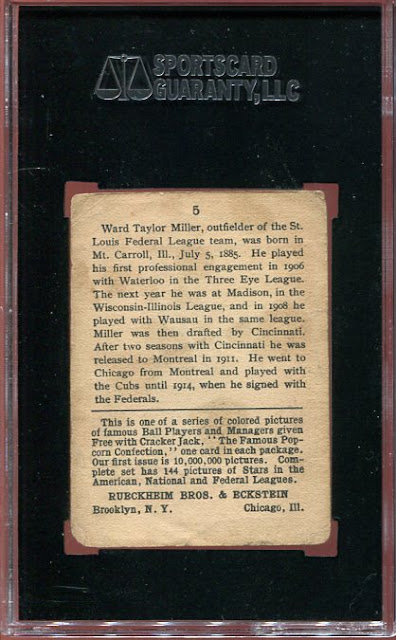 Note the production company's Rueckhein & Eckstein, since Cracker Jack was just a product in 1914. They renamed to the Cracker Jack Company prior to their purchase by Borden in 1964.

Fakes / reprints: So many have reprinted Cracker Jacks that I've personally struggled to separate ungraded fakes from authentic cards. The thicker stock used for 1915 holds up better than 1914 and is easier to find, so I recommend getting a type card from that set.
Posted by Matthew Glidden No comments:

Happy 55th birthday to Alan Trammell! He appeared as #5 in Donruss's debut baseball set, who joined Fleer in finally pushing Topps off their MLB monopoly mountain in 1981 after attempts by others throughout the 60s and 70s came up short. 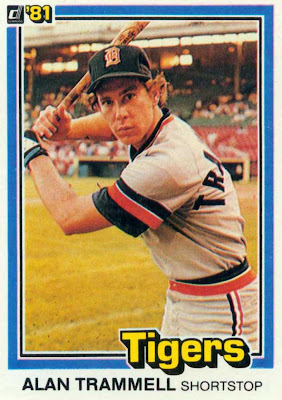 Is that big-eyed look surprise or intensity? Did the photographer jump Trammell in the middle of pre-game warm-ups? Is Alan is defending himself with that bat? 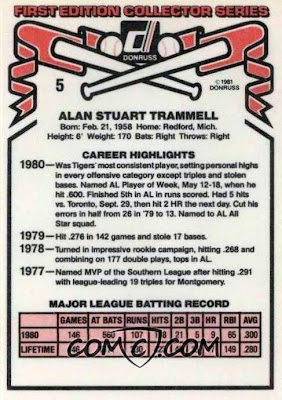 I collected 1981 Donruss fresh from packs as a youngster and burned much midnight oil reading their chronological highlights. Even basic evaluations like "was Tigers' most consistent player" set a context for pre-Internet fans who rarely (if ever) saw games outside their home city. "A shortstop who's also his team's most consistent hitter? I would trade my whole infield for that guy!"

My team, the Mariners, started Mario Mendoza at short for most of 1980. Good: Mendoza set a career high for OPS+! Bad: his "high" of 63 was still terrible, especially compared to Trammell's career 110 OPS+. (For reference, only 53 guys in Cooperstown amassed at least 2000 hits with 110 OPS+.)


Trammell holds a special footnote in collecting history because his solo Rookie Card comes not from Topps, where he shares the bill with Paul Molitor, but Burger King's 1978 Tigers set. His #15 shows off the crisp and classic Tigers home uniform, complete with matching undershirt, a great piece of cardboard for team or type collectors (full 1978 set profile).

Fakes / reprints: I doubt anyone would make money faking 1981 Donruss cards, but it's possible promotional reprints exist.
Posted by Matthew Glidden No comments:

One of my favorite type cards in the collection, starring HOF lefty and master of the screwball, Carl Hubbell. 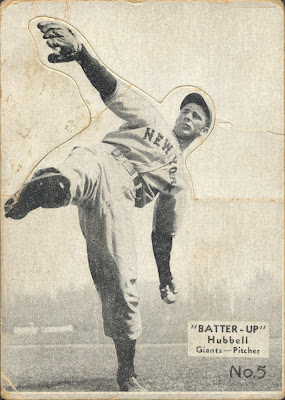 There's a little of everything in this photo, from visible spikes to high leg kick to bloused pants to an artistically foggy background. The die-cut edge surrounding Carl's upper half allowed collectors to detach and bend the top at an angle, standing their batters (and pitchers) "up," hence the set name. I bet many kids run games on bedroom floor ballparks, just as they built blanket mountains for army men or played house with stuffed animals. 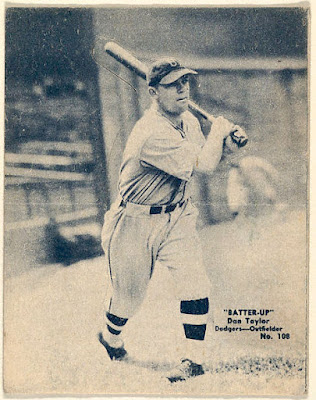 National Chicle printed each Batter-Up! series in multiple colors, creating a challenging task for variation or master set collectors. #1-40 came out in six tints (black, red, brown, blue, purple and green) and #41-80 just four (black, brown, blue, purple). Its second series, #81-192, measures 1/4" shorter and comes in four (black, brown, blue, and green).
While Batter-Up! omits Lou Gehrig (exclusive to 1934 Goudey) and Babe Ruth, it's otherwise full of Hall of Famers (set checklist) and impresses me as the first set with modern dimensions to focus on full-card player photos. I love all the high socks, classic uniforms. and old gloves. 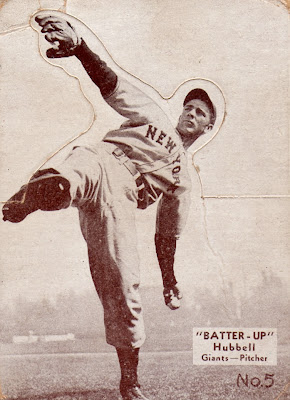 I first wrote about Batter-Up! and similar die-cut sets back in 2008 for Things Done to Cards. The die-cut on this sepia Hubbell's off-center a bit, so he'd lose a spike when folded.
TRIVIA: New York retired Hubbell's #11 in 1944, the first Giants player so honored.
2021 UPDATE: Thanks to research by Jason Schwartz, it appears National Chicle avoided creating new Batter-Up! cards in 1935, perhaps to continue selling excess 1934 inventory, and picked the set up again in 1936.

Value: Hubbell runs $20-40 in low-grade (e.g., missing the fold-down flap and moves into three figures in mid-grade or better.

Fakes / reprints: The die-cut makes this set harder to fake and I haven't seen any in the marketplace. Several modern retro sets repurposed Batter-Up's die-cut style and sepia design.
Posted by Matthew Glidden No comments:

Pro baseball in Utica has a long history, including eras as both MLB affiliate and independent team (more at Wikipedia). Many fans know these Blue Jays better as the Blue Sox, the single-A squad that author (and team owner) Roger Kahn profiled in Good Enough To Dream, his up-close-and-personal look at running an independent team. Kahn's storytelling makes a good minor league companion to the player's perspective captured in Dirk Hayhurst's recent books. 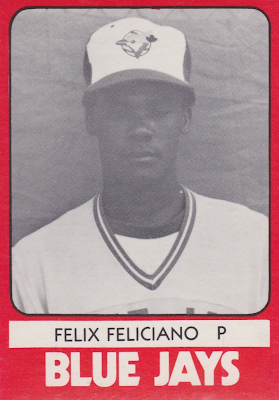 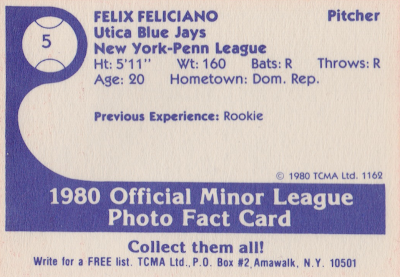 If we believe Baseball-Reference, "rookie" describes Felix's entire career, just 7 games of low-A ball in Utica. That makes today's #5 his only known baseball card and twice the bummer that it's a lousy photo.


TCMA printed 33 cards for Utica, but just 3 of Felix's teammates eventually reached the bigs; Juan Castillo got the most MLB service time with 199 total games over 4 seasons.

Fakes / reprints: TCMA reprinted several team sets for "collectors kits" in the late 1980s. Those reprints used black ink on the backs and originals have the blue ink shown above.
Posted by Matthew Glidden No comments:

We live in a hobby littered with questionable photography. 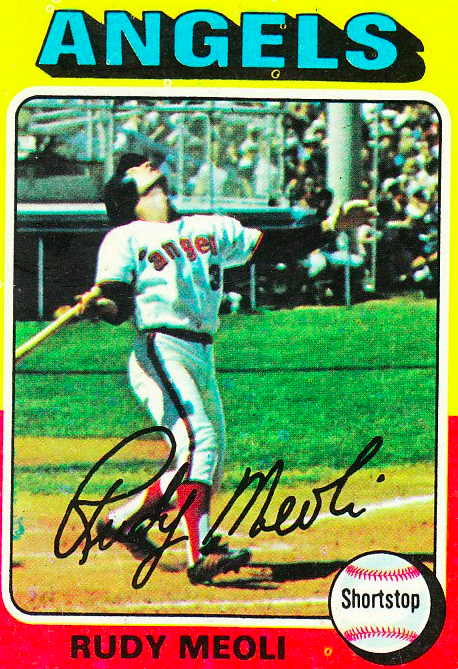 That shot is just one of so many to choose from (or avoid).

But at least guys like Ty Cobb don't have to worry about disrespect to their playing poses. Usually? 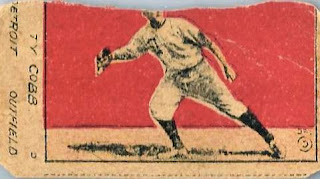 This 1921 W516 strip card commits three errors on one play. It shows Cobb backwards (glove on wrong hand, logo on wrong side of jersey), fielding instead of batting or running (his normal card M.O.), and missing 50% of his noggin from bad machine cutting or clumsy scissor work. What makes this botched image notable is that it's the first W516-2-2 #5 I've seen, one of several variations on a single strip card theme. Another apparent W516-2-2 from eBay nearly drops the "DETROIT OUTFIELD" tag line entirely. 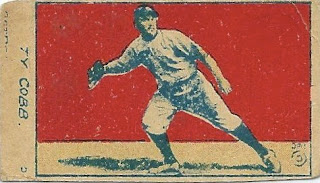 1920s printers were nowhere near as organized as those today, so production differences prove common (and frustrating) for modern collectors. For example, W516-2-1 (profiled in 2009 and shown below) used the same image with a typeset name. 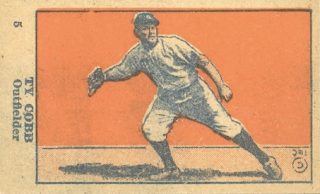 Note that IFC (C) sign at lower-right's backwards on both cards. There's also this W516-2-3 version with typeset name and corrected IFC (C). 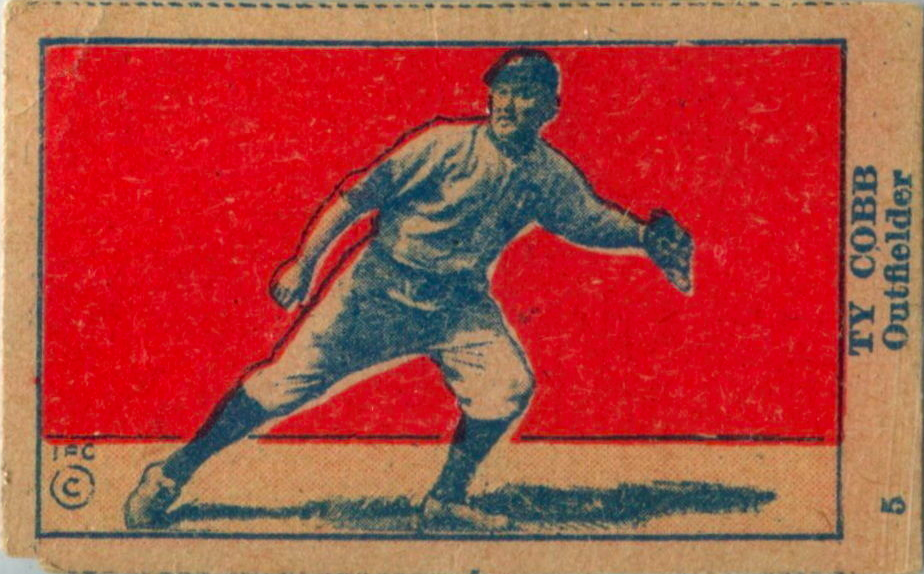 
W516-2-* checklists share the same 30 players with W516-1-*, but use different numbers. My profile of W516-1-1 #5 Tris Speaker goes into more depth on the set's origins. Many card references disagree on the W516-*-* classifications, but experts at Net54 discussed them in detail.

Value: An eBay seller listed this abused #5 for $50, more than I've paid for other VG/EX W516 Cobbs in the past. It's possible the market's ready to shell out more for these humble strip cards, but more likely that eBay encourages people to charge too much.

Fakes / reprints: Ty Cobb's always vulnerable to counterfeiting, so buy from dealers you trust and know the provenance of their stock.
Posted by Matthew Glidden No comments: