As a charter member of the Pacific Coast League, Oakland's Oaks were in their 5th decade of play when WWII ended. Many considered the PCL a "third major league" in talent level, but clubs rarely affiliated directly with MLB counterparts and worked hard to build and maintain quality rosters. Oakland made a brief alliance with the Yankees in the mid-30s, but their biggest contribution to New York followed the era pictured on today's card. 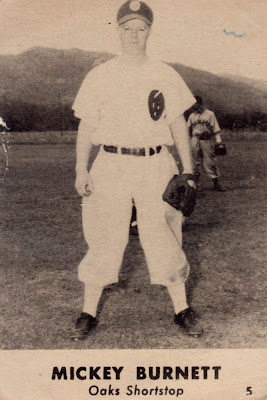 These Oaks played under Casey Stengel, as the future HOFer "rehabbed" his managing career with minor league titles in Milwaukee (1944) and Oakland (1948) prior to taking over the Yankees in 1949. His use of platooning and strategic play helped guide New York to an astounding 10 AL pennants and 7 World Series titles in only 12 years. (20 year-old rookie Billy Martin followed Stengel out of Oakland and contributed to several of them.)

Baseball history fans should check out the Oakland Oaks of 1948 fan site, 1946 PCL intro movie, and (for PC only?) the 27-minute Casey and the Nine Old Men documentary. This wealth of videos, photos, and player profiles fills out a story I can only touch on. 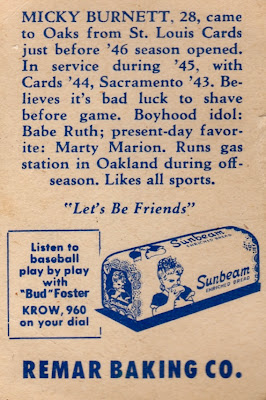 Card back (with "Micky" misspelling)
Remar's set includes 25 Oaks players and measures 2" x 3", slightly smaller than modern cards. They printed similar sets each year from 1946 to 1950 and most share a design with 1947-48 issues from Smith's Clothiers. (Find more set details at CenturyOldCards.com.)

Value: Less-heralded players like Mickey cost $5 or so in low grade. Casey Stengel is about triple that as the set's "star."

Fakes / reprints: While not impossible to find, Remars are rare enough that collectors might've reprinted them, especially the Stengel. Set builders in high grade should familiarize themselves with similar sets and buy from experienced dealers.
Posted by Matthew Glidden