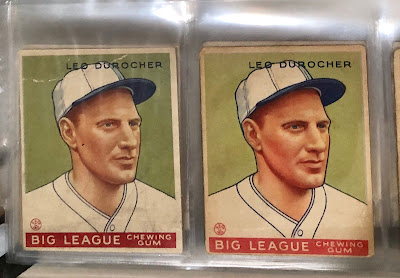 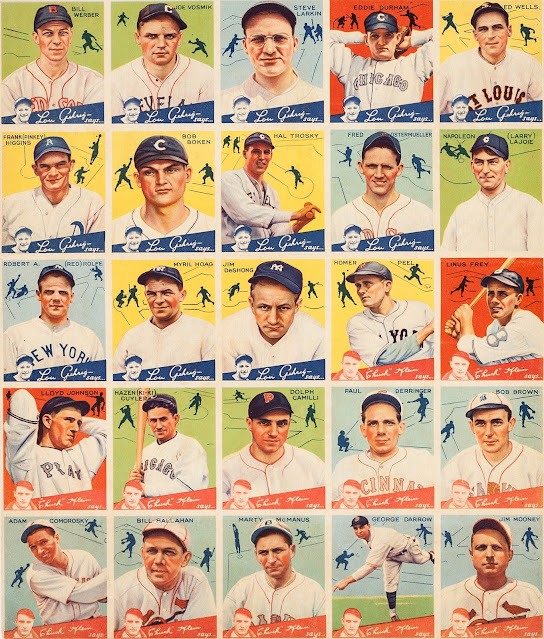 While this means Goudey printed as many 1933 #106 cards as they did 1934 Bill Werbers, Lajoie never went into wax packs. We can assume all copies available today came from 1930s mail-in requests or from Goudey's leftover stock sale in the 1960s. It's a good bet they discarded or destroyed the remainder. (Ouch, babe.)
Designing a white whale
When Goudey yielded to demand and decided to create the missing #106, they assembled it from a melange of 1933 and 1934 Big League Gum elements. On the front, Larry's sliding silhouette mimicked 1934 #65 Cliff Bolton. 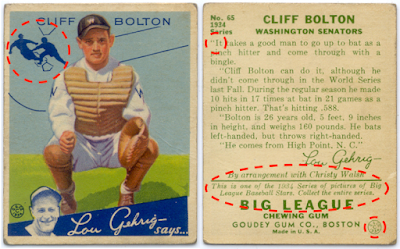 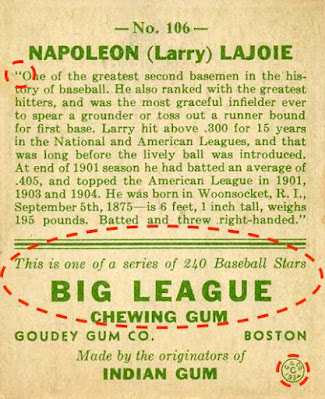 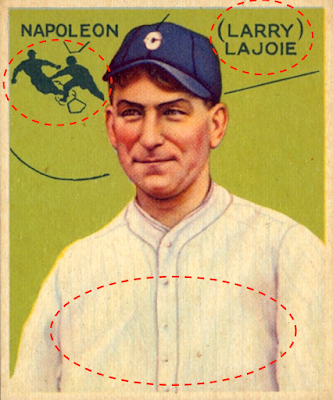 There's our Cliff Bolton slide alongside slimmer-than-1933 name lettering and a big empty shirt space where something else could be. That big jersey space reminded me of a different Goudey set: 1933-34 Sport Kings Gum.
Sport Kings Gum covered a range of "Stars and Champs of Today and Yesterday" across two series, one released in late 1933 and the other in early 1934. Two baseball players appear in series one (Ruth, Cobb) and one in series two (Carl Hubbell). A few Sport Kings, like the Babe and Hubbell, were still active and doing their thing. Many others, like Cobb, were years removed from their famous professions or achievements.
I see Sport Kings Gum as a nostalgia pitch to older fans who remembered the 1910s and 1920s. Goudey also used it to sneak another Babe Ruth into 1933 before their license to use his image expired. That makes six different 1933 Goudey Ruths, if you count four Big League Gum cards and this mail-in premium.
Pulled from the cold case files
While Big League Gum focused on active ballplayers, Sport Kings Gum covered people foundational to sports and culture in general, like Duke Kahanamoku, Babe Didrickson, and Jim Thorpe. Seeing how Lajoie's career lasted from 1896 to 1916, that's the mold he fits. Back in 1933, Nap's last on-card appearance was already a dozen years old and described him as "former 2nd base."
So if Lajoie should've been in Sport Kings, why wasn't he? I suspect Big League Gum proved so popular that it changed Goudey's original plans.
Trading at the deadline
Jason Schwartz's "An alternate history of 1933 Goudey" describes the midseason scramble surrounding Big League Gum in great detail. While I recommend reading the whole thing, focus on three points.
Sport Kings Gum's first series (#1-24) came out in late 1933, at about the same time Big League Gum's final series, allowing Goudey to compare results. Since Big League Gum's final series included all World Series players, 12 each Giants and Senators, they also gave New York ace Carl Hubbell his second card in the set.
It's easy to imagine strong sales for a series of World Series players, King Carl included. If so, you can guess what came next.
I think Goudey had Sport Kings Gum series two (#25-48) ready to go with Lajoie at #42 and just bumped him in favor of New York's new World Champion and 1933 NL MVP. After all, Lajoie hadn't played baseball in 17 years. Give kids more of what they want!
That move left orphaned Lajoie art available for other purposes, like filling the gap at #106. While I doubt they predicted needing it later, Goudey's opportunism allowed them to avoid wasting completed work. Add some bits of 1933-34 design, slip it onto a Big League Gum print sheet, and move on to the next thing. 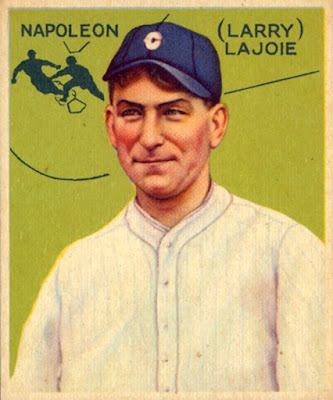 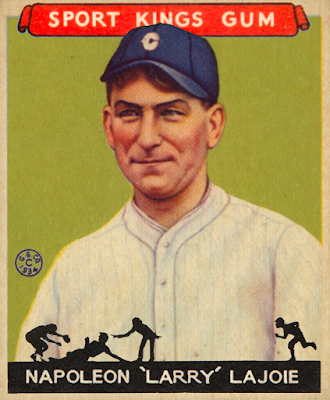 Now that's a Sport King we can root for. Slide, Larry, slide!
Conclusion
I never felt at ease with the idea of Lajoie dropping unexplained into a set otherwise full of active -- or at least recent -- players. It fails the sniff test for a company that made decisions with the bottom line in mind.
Knowing what we know about Goudey's business practices, set construction, and 1933 sales, I believe this series of events explains Napoleon Lajoie's appearance on 1933 Big League Gum #106. Other collectors and historians may disagree and alternative ideas are welcome. Either way, loving that look of Nap under a Sport Kings Gum banner.
Posted by Matthew Glidden 4 comments: