Congratulations to the former New York Giants, 2010 World Series victors over the former Washington Senators in 5 quick games! There's extra joy in a convincing win by the underdogs, since most folks with a microphone or video camera picked Texas. 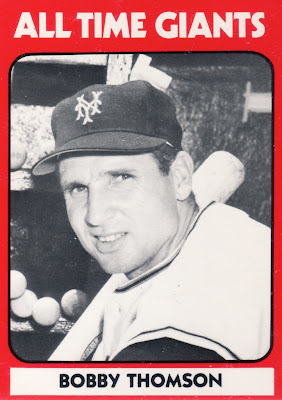 Card front
Today's red-on-white front design mimics other team-specific TCMA sets, such as the 1980 Philadelphia Whiz Kids (#5 profile of Curt Simmons). They selected 12 former Giants as the team's best, with 3 pitchers and a manager.
This "lineup" style carries over to several other TCMA All-Time team sets, including the Dodgers, White Sox, Cubs, Yankees, and Tigers. (Look for more of them in the near future!) 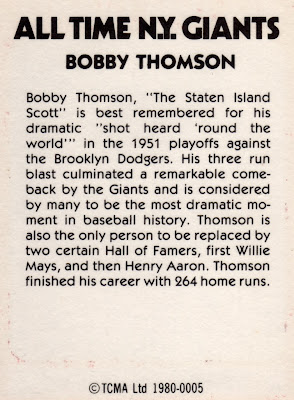 Card back
The hero of 1951's NL pennant winners, Bobby passed away at 86 in August of 2010. The back text should say "Staten Island Scot," for his own Glaswegian (born of Glasgow) heritage. He remained by all accounts a gentleman into his retired life and made a minor business of appearing with Ralph Branca, pitcher for Thomson's famous homer.
Value: Most of this set's available on CheckOutMyCards for $1 or less.
Fakes / reprints: Can't imagine anyone making money off reprints for this kind of set and haven't seen any in the market.
Posted by Matthew Glidden