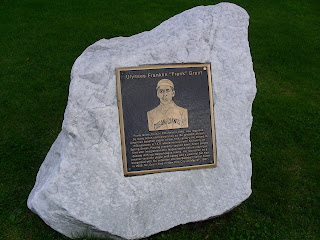 I joined several friends at the summertime Williamstown Theatre Festival (aka W.T.F.) earlier this year. During a stroll through the main business area, we discovered this sturdy memorial to Frank Grant, one of the most prominent 19th Century players and a 2006 HOF inductee. (That's 103 years after the end of his career for those scoring at home.)

The memorial's stoic quality impressed me and I'm happy to learn a little more about this pioneer of the game, whether you think of him as an African-American player, or just a power-hitting second basemen. This rock-and-plaque sits in Williamstown, but Frank's hometown is nearby Pittsfield, MA. You can catch games featuring the Pittsfield American Defenders (formerly "Dukes") during the summer at its Wahconah Park, one of the last American parks to feature wooden grandstands. 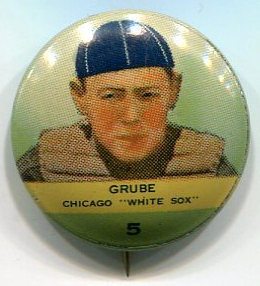 Fakes / reprints: It would be tough to fake a pin, but the set does include several Hall of Famers, so I recommend buying a type "card" from dealers with vintage expertise.
Posted by Spike Glidden 2 comments:

This interesting set from Gum, Inc. (also the producers of Play Ball) pictures two teammates on each card. Simple demographics and performance info (i.e., "batted .266") fill out the details and make for a very minimal appearance. At two each, 75 pieces of cardboard total 150 players, including a variety of well-known and forgotten players. See the complete checklist for all of the card combos. 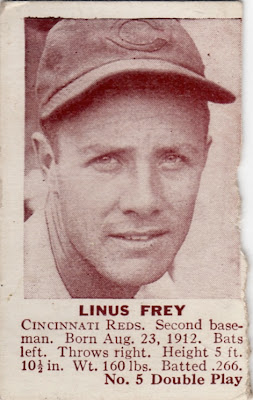 Card front (blank back)
Mr. Frey's teammate, (and #6) Johnny Vander Meer, went missing at some point, making this card perfectly suitable for this type collection. Most of the pictures look like Linus, vertical portraits with decent lighting. A few (mostly in the middle of the set) capture them at distance or in action, including a nice double batting shot of Ted Williams and Joe Cronin.

Though some show up as "individual" cards (probably thanks to kids from the 40s), most modern collectors go for intact Double Plays. They're not particularly hard to find, but anything pre-war and in decent shape commands high prices these days. I had the good fortune to score a complete set that'd been trimmed into pairs (and later reassembled using tape) for $300 last year on eBay.

The composition quality varies quite a bit, so look for a nice pair of photos if you want a type card of your own. #77/78 shows one of the better choices; Bob Feller always takes a good picture and his fellow Indian Joe Krakauskas looked happy to be paired with him, even if he couldn't crack the Cleveland rotation itself.
Posted by Spike Glidden No comments:

I miss the classic cap-and-tie umpire fashion shown on today's card, since retired in favor of more utilitarian hats and polo shirts. While a good deal more comfortable and movement-friendly, it's nowhere near as natty. 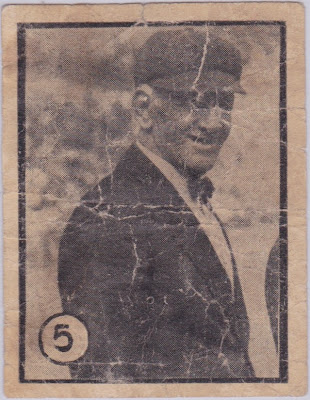 Creasing and fading aside, Quico Magrinat presents well for mid-1940s camera and printing technology. He’s part of a 100-card set from Cuba's Caramelo Deportivo cigars dubbed Felices. They packaged each paper-thin player in packs of tobacco products and most collectors pasted them into an album (see below) directly over pictures of the cards themselves. 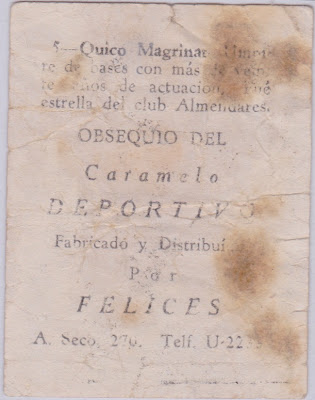 Even when cards didn’t end up glued in place, their fragile nature means that almost any example you find will be low-grade. My own copy is creased and stained, but otherwise legible.

American umpires occasionally made cameos in sets and their best showing's from the high series of 1955 Bowman. (Putting umps on cards helped the flagging company fill out their checklist at a time of fierce competition with Topps over "real" players.)


My favorite contemporary card is of Bob Motley, the former Negro League umpire who appeared in 2008 Allen & Ginter.


Caramelo Deportivo printed this colorful collector album for its 1945-46 set. 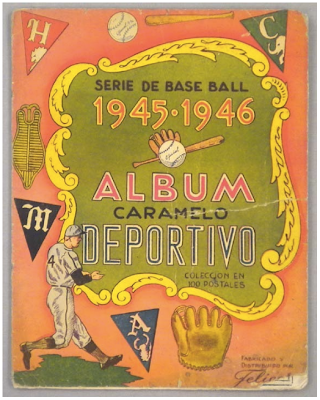 The album's opening page includes the league umpires, with #5 Magrinat at right. 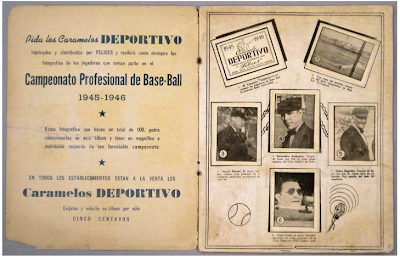 This particular album's mentioned in The Pride of Havana: A History of Cuban Baseball by Roberto Gonzalez Echevarria, who calls it "a relic of an age about to end."


The "age about to end" was Cuba's first era of Cuban-run professional baseball, which re-aligned with USA leagues and owners for the decade prior to Castro's 1959 revolution. International tourism rose, American games started appearing on Cuban TV, and kids bought packs of Bowman or Topps in Havana candy stores. Domestic card production continued through 1958 (see CubanBall.com for examples), but never reached the quality seen stateside. Post-revolution Cuba broke diplomatic ties and disbanded their pro league, leaving these post-WWII sets as our readiest pictorial record of the teams and players.

Value: I picked up the pictured #5 for $15 from CubaCollectibles.com. Most cards on eBay are position players and former Negro Leaguers generate the highest prices.

Fakes / reprints: It'd be easy enough to counterfeit these black-and-white cards with modern equipment, but fakers might find limited interest from collectors, given the set's low profile (and pictured umpire).
Posted by Spike Glidden No comments:

Many consider O-Pee-Chee (aka, OPC) a Topps hanger-on, or simply the Canadian version of an American classic. Surely the relationship's more nuanced, but it's easy to understand the impression. Collectors, focused as we are on cardboard, could assume as much from OPC's re-used designs and very similar checklists. Until the late 1970s, the two companies differed primarily in two things: paper stock and the inclusion of French. 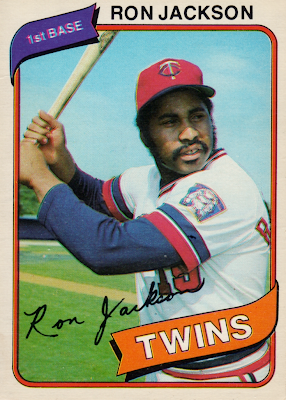 1980's OPC set again mirrors the American design, but the checklist and overall set focus differs notably. Topps led off with 6 “Highlight” cards that celebrated 3000-hit plateaus and a handful of record breakers. (Their #5 is Garry Templeton cracking 100 hits from each side of the plate for the first time.) OPC, on the other hand, went right into “normal” players. Craig Swan received #1 after his excellent 1979 campaign. Twins outfielder Ron Jackson bats fifth, a more glamorous (to me) position than Topps #18. 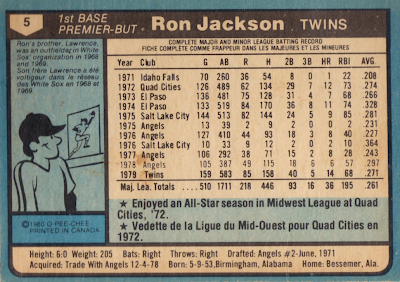 With 28 active teams, the set should include about 26 players each. Does OPC's Canadian roots mean a greater share for Toronto and Montreal than more geographically distant teams?
Numbers say the answer is "no." Canadian sets (including OPC and Leaf) would later dedicate a larger share to their countrymen, but that's just not how they rolled in 1980.

Value: Only superstars cost more than a quarter or so for cards from the 1980s.

Fakes / reprints: Haven't seen any OPC reprints in the market.
Posted by Spike Glidden No comments:

A number of side stories lurk peripherally near 1941's Play Ball set. First, there's the building war in Europe, which sapped both headlines and raw materials stateside. Second, color printing finally arrived in a major set, something that came and went for a decade before Topps and Bowman finally made it the default in the 1950s. Third, Play Balls maintain enough appeal (and demand) that modern collectors should be cognizant of reprints and especially counterfeits. Of the half-dozen fakes from my own history of eBay purchases, three of them were from 1940 and 1941. 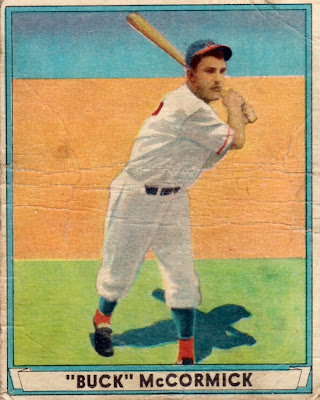 Card front
With all that extra stuff going on, the cards themselves can become just incidental holes to fill in a binder. Don't let that happen to your PBs! Even this picture of Buck McCormick, a strong-but-forgotten player, shows off some interesting design and fan-friendly features. 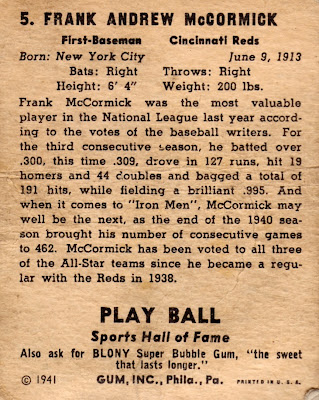 Chicago's Exhibit Supply Co. created over-sized sets of photo cards for several decades, usually one--but occasionally four--players each. They came in penny arcade machines, like how my GenX childhood brain remembers Ford Gum. Almost every “issue” went out without a numbering system (and thus, lacking #5), probably because they thought about fan interest more than collecting interest. Buyers of non-sport subjects (movie stars, boxers, etc.) don't worry about “seasons,” so the company didn't either. 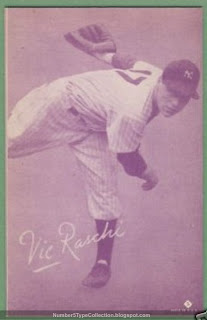 That said, all hail the Canadians! This 1953 set does focus on baseball and numbers each of its 64 players. The checklist mixes USA heavyweights like Jackie Robinson, Musial, DiMaggio, and Williams with Montreal minor leaguers, including (among others) future HOF managers Walt Alston and Tommy Lasorda, the latter a full year before his first Topps card.

Yankee pitcher Vic Raschi's sweeping follow-through fills in #5 and, like the rest of the set, comes in a pair of colors, depending on series. (1-32 come in purple or green and 33-64 are blue or brown.) Vic's nickname, “The Springfield Rifle,” caught my eye, since it came from his Massachusetts hometown, a place where I also lived back in the 1990s. Until I write a much-celebrated and venerated Great American Novel, it's rightly known for the basketball HOF and Dr. Seuss.
Posted by Spike Glidden 2 comments:

Thurman Munson served as sixth captain of the New York Yankees from 1976 until his death in a 1979 plane crash. He performed brilliantly at bat and behind the plate, becoming the only Yank ever to capture both the ROY (1970) and MVP (1976). The team retired uniform #15 in 1979, signifying the magnitude of his contributions despite the relative brevity of his career. 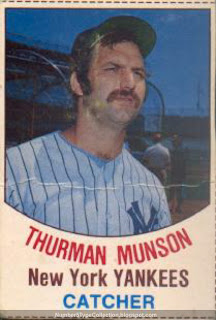 Card front
Badly in need of a boost out of their 1960s malaise, homegrown talent like Munson and free agent signees like Catfish Hunter and Reggie Jackson drove them to three consecutive World Series appearances from 1976 to 1978. The volatile combination of George Steinbrenner, Billy Martin, and Jackson provided lots of grist for the media mill, even as the team itself returned to prominence. With Jim Rice and Fred Lynn leading a parallel resurrection in Boston, the inter-team rivalry reached a frenzied peak now familiar (and fatiguing) to baseball fans from other cities.

This particular Hostess set continues the theme and distribution style from those released earlier in the 1970s. Each snack box contained a panel of three players surrounded by a dotted line, all the better for scissoring into individuals. (Munson's panel is 4-5-6, sandwiching him between Yaz and Bench.) A relatively large number of panels made it to the modern day uncut, so some collectors build it entirely intact.

If you see a full, uncut card without left-and-right companions, it's actually part of the Twinkie set. That “parallel” set packaged one card with each sponge cake, which made for somewhat easier trimming. (Twinkie cards more frequently show a dark yellow stain from the cake.) Card fronts for both sets show the same picture and differ only slightly on the back, where Twinkie cards include a black bar (or rectangle) along one edge. “Regular” Hostess card backs show stats but no bar.