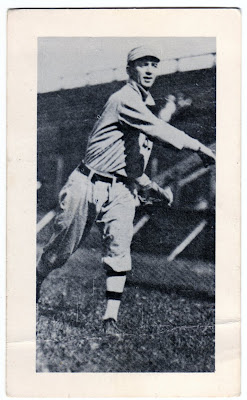 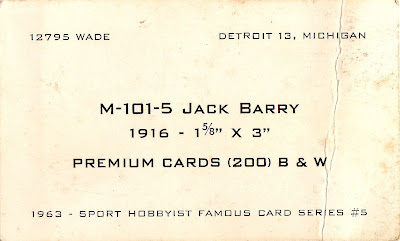 Fakes / reprints: It's already a low-value reprint, so I doubt anyone went to the further trouble of counterfeiting them.
Posted by Matthew Glidden 2 comments:

A while back, I broke down the 1950-70s Venezuelan sets that started as Topps partnerships and evolved into local knockoffs of American issues (full list of set profiles). After years of hunting, my collection includes all those 1959-77 types except this white whale, a 1968 league leaders card starring 3 HOFers and the Toy Cannon in a black hat. 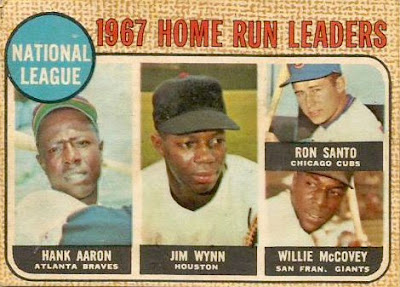 Jim Wynn's airbrushed portrait encapsulates multiple elements of the 1968 zeitgeist. First, Topps ran into union issues with the new MLBPA, denying access to new uniform photos usually taken in spring training. On the other side of the boardroom table, the revenue heyday of America's Space Race purportedly led the owner of the Astros to ask too high a price for his franchise name and logos. Those business snafus wouldn't have made sense to candy store collectors, so Topps did their best to retouch old pictures and went with "Houston" for a couple of years. All four photos on this #5, in fact, are cropped from earlier 60s Topps sets. 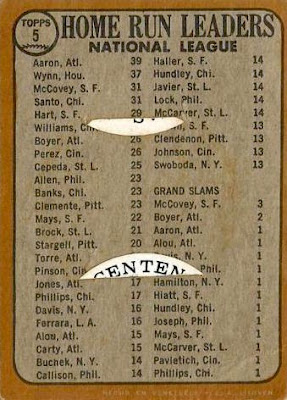 The white Spanish footer text identifies this as printed in Venezuela and those familiar with 1968 backs can tell the set uses darker yellow ink than American cards.

"Hecho en Venezuela, C.A. Litoven" is courtesy of the Caracas-based publisher that printed these cards. All Venezuelan-made sets are much rarer than real Topps, but some still turn up in large lots of 1960s vintage. I've found a half-dozen singles in low-grade show boxes over the last decade and you can generally flip quickly through backs looking for the darker ink.

Fakes / reprints: This whole set is sort of a reprint and can be mistaken as American-made. It's more important not to overpay for real Topps as if they were Venezuelan.
Posted by Matthew Glidden 2 comments: