Back before my dad's time, one Philadelphia company served as America's premiere gum card maker, creating a multitude of sets spanning the WWII era. Sport sets included baseball, football, and basketball. Non-sports included pop culture, war machines, and law enforcement. Kids liked all kinds of things, so they made all kinds of cards.

Founded as Gum, Inc. and later renamed Bowman Gum after founder Jacob Warren Bowman, the brand name ("Bowman, Home of the Rookie Card") lives today under the Topps umbrella. This post covers five vintage Bowman sets that proved key to card history and design. Baseball and sports cards didn't dominate the vintage gum card market like they do today, so I try to show how non-sport and sport blazed trails for each other.

In the mid-1930s, fascist-led conflicts (Spain's Civil War, Italo-Ethiopian War, Sino-Japanese War) brought death and destruction onto headlines and into wax packs. Gum, Inc. led that effort by selling kids over 100 million colorful and shocking war cards on a size and card stock similar to Goudey's well-known baseball sets. Every card shows something happening, like this pilot thrown from the fuselage of his exploding plane.

Horrors of War's first series (#1-240) proved popular enough to spawn a second series highlighting the threat of Nazi Germany (#241-288). All cards professed, "To know the HORRORS OF WAR is to want PEACE." 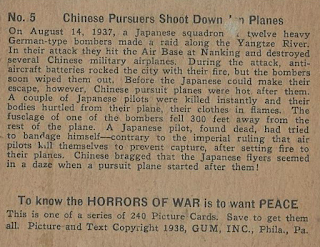 "War Gum," as kids called it, sold so well that it remains available and popular today. Goudey Gum, their top 1930s competitor, responded with two middling sets of military themes. Based on what's available in the market today, neither matched the popularity of Horrors of War.

Buoyed by the success of Horrors of War, Gum, Inc. soon pushed into the baseball market. I've profiled the Play Ball sets before and my Collecting Joe DiMaggio in Yankee Pinstripes post shows all three. They're clean and popular, best known for early cards of Ted Williams and the Clipper. My favorite card's another DiMaggio, "Patchwork Vince."

1941 Play Ball's checklist numbers 72 cards, but modern researchers believe Gum, Inc. added 49-72 as a new series for 1942, reflecting the fan fever Ted Williams and Joe DiMaggio generated in 1941. That makes Vince part of its second series and reflects the practice (also used by Goudey & National Chicle) of selling and adding to the same set design across multiple years, rather than a single baseball season. See this article by Rich Mueller for more.

Bowman's founder endured multiple lawsuits thanks to Gum, Inc's success and its drive to cut production costs. I suspect that for both legal reasons and wartime production needs, it made sense to rebrand as Bowman Gum, distinguishing them from other gum makers. When they reentered the market in 1948, Bowman's name appeared on all card backs: baseball, football, basketball, and non-sports.


The company's return to baseball in 1948 showed the same black-and-white look as 1939, dropping their hand-colored 1941 style. As the recent find of unopened packs show above, Bowman continued to use the "Play Ball" name in 1948. They changed to "Base Ball Bubble Gum" for 1949 and beyond.

I'm combining these sets into one sequence, given their evolutionary design impact. Like many vintage collectors, I discovered Bowman baseball through the artistic excellence of their 1950-52 sets. Unlike 1952 Topps and Sy Berger's kitchen table, Bowman's design didn't emerge whole cloth from a single source.


Bowman's non-sport gum packs sold best during baseball's offseason and they developed this artistic look starting with 1949 Wild West, itself inspired by the post-WWII popularity of 19th century Western nostalgia. 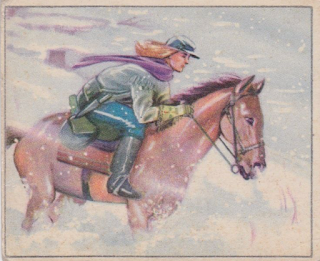 Wild West used the same 2¹⁄₁₆ by 2½ size as their 1948 and 1949 baseball cards, with hand-painted art that mimicked existing Western art and photos.

Next up, the history and retrospective 1950 set "Wild Man." In the same way Bowman's 1948 baseball set harkened back to their 1939 design, Wild Man looked back to 1938 Horrors of War. Card fronts show humanity's history of murder, danger, and conflict. Card backs once again emphasize the need for peace. 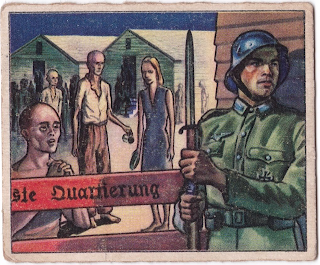 Third, there's 1951 Red Menace. Thanks to America's entry into the Korean War, the era didn't feel peaceful. Fear of the Communist "Red Menace" inspired Bowman to sell a set by the same name. Slightly larger (2½ × 3⅛) than their 1949-50 sets, this would be their last squarish design before making cards longer and rectangular.


It's worth noting Topps competed with Bowman in war before they competed in sports. Red Menace came about in part because Topps struck a candy store hit with Freedom's War in 1950, a 203-card set of military hardware and figures active in WWII and Korea.

Topps used high quality art on Freedom's War and tested innovations like die-cuts to create tanks that could stand up. While this didn't push baseball design forward yet, it did push Bowman design forward. 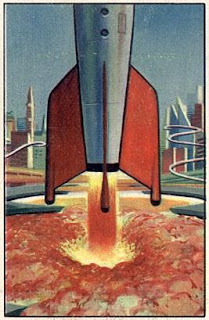 Jets, Rockets, and Spacemen told a story about Capt. Argo and his crew that covered nearly the entire 108-card set. Read them all via scans in the JRS section of Lowell's Place. 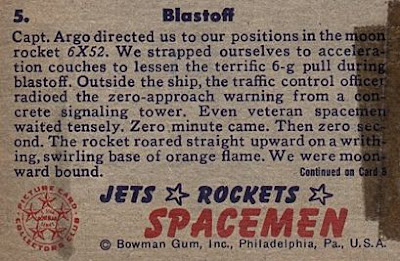 Their elongated look carried over to 1951 baseball -- or maybe the sets coexisted as nerds and jocks of the candy counter. 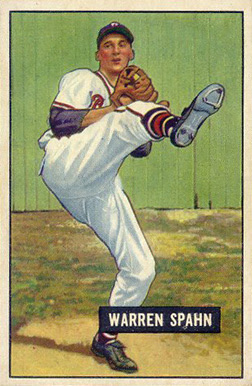 Even when Bowman's 1951 baseball cards reused 1950 pictures like Warren Spahn above, the different dimensions brought you closer to the player.


Bowman used hand-painted art again in 1952, swapping in autographs instead of block letter names. By this point, all those artistic innovations from 1948-1951 result in a beautiful finished product. You've got a card that fits in a kid's palm, looks great, and only suffers in comparison to Topps' larger breakout set. (There's no question Topps made a groundbreaking set in 1952; I like looking at the Bowman set more.) 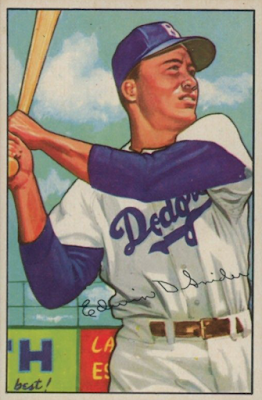 My dad became a baseball fan in the 1950s because of this guy, Duke Snider, shown with his original photo, and I've been lucky enough to inherit some of his own Snider cards. Bowman's artist added clouds and tweaked the fence to accentuate Duke's placement in the top 2/3 of the card. 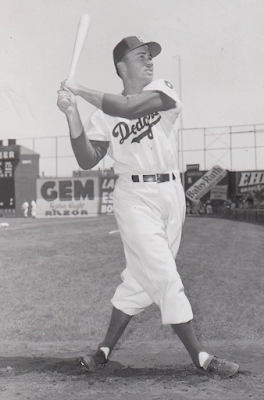 Topps' huge success with their 1952 set ended Bowman's baseball self-determination. They shifted to competing with Topps for player contacts and overextended financially trying to print bigger cards with better photos. Just four years later, they called it quits and sold all player contracts, designs, and trademark assets to Topps.

I'd like to see the alternative timeline where Bowman's artistic sets survived in the market alongside photo cards. Today, that might happen, given the age range and varied tastes of collectors. The nickels and pennies 1950s kids spent on chewing gum just couldn't support both.
Posted by Matthew Glidden 3 comments: