TCMA printed this direct-to-collectors set of (then) living players with a blank box for autographs, encouraging fans to mail them out or (possibly) seek out a personal appearance. But wait, why write a personal letter or drive down to that new car dealership? Modern collectors bid those days of the 20th century farewell! Today, folks can expect sets to include player signatures, either as pack hits or promotional send-aways from Topps and Panini. Compared to postal requests (a.k.a., "TTM" for through the mail) or waiting for players at the team bus, it's a whole new world of searching for inked cards. 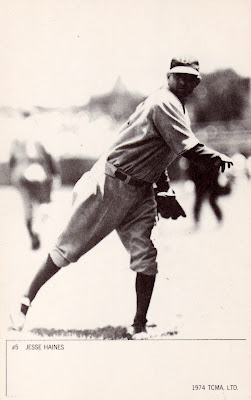 While all 36 players in its checklist were alive at issue date, only a few remain with us, marked in bold. After 18 years pitching for St. Louis--still a franchise record--Jesse Haines spent 1938 coaching in Brooklyn, as pictured. This both explains the "B" on his cap and makes it a hard-to-find card for Dodger team collectors. (He passed away not long after, so a signed #5 might be nigh-impossible.)

Value: Unsigned cards like my #5 cost a few dollars or more for prominent HOFers. Signed versions of players who died in the 1970s run significantly more.

Fakes / reprints: I'd worry more about signature authenticity than a faked card, given the set's otherwise low profile and demand.
Posted by Matthew Glidden