At the 19th century advent of baseball cards, business owners didn't consider kids a useful target audience. Only adults earned money and owned stuff, so why go after customers who have to scrounge for pennies? This seemed sensible to tobacco companies at the turn of the 20th century, but candy companies would take over their market within a generation by targeting that small change. 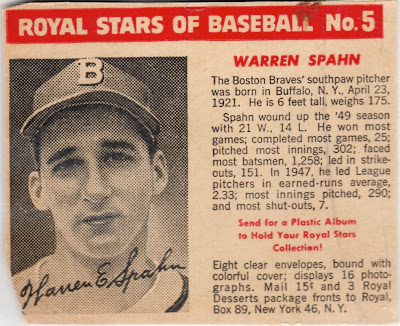 Card front (blank back)
By the time 1950 rolled around, it'd become obvious that kids prompted family spending. Post-WWII suburban living meant televisions, supermarkets, and mass produced goods, all the better to "program" into family consumption habits. (That's not meant politically--it's largely the approach advertisers took to build up reliable income.)
Paper boxed products made excellent card material and Royal Desserts is just one of many companies to take advantage of baseball cross-promotion with this 24-player set. Collectors trimmed away "extra" cardboard, which often included portions of the player himself (see my Spahn). Full boxes closely resemble JELL-O's 1962 set. 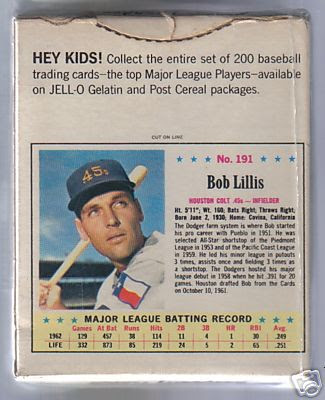 1962 JELL-O #191 Bob Lillis
Royal reused the same images through 1953, updating bio text and teams as trades shuttled them around. Some guys have up to 4 variations, so a "master set" contains 47 different cards. (More info at Old Baseball's set profile.)
Value: Mis-cut versions of stars cost up to $20, with nice ones running more. Complete boxes can cost a lot, given their rarity.
Fakes / reprints: This would be an easy set to fake, so familiarize yourself with its players and variations before making a big purchase.
Posted by Matthew Glidden