Pepsi's Junior Mariners and the Deadly Ramps of the Kingdome

The Kingdome! It lived, it died, I kissed many Seattle Mariners ticket stubs goodbye. 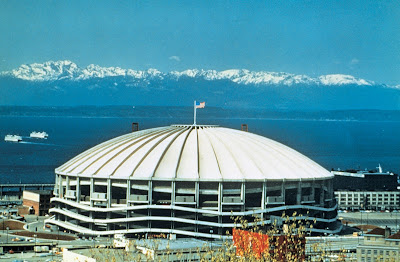 As a young transplant to Washington state in 1979, I took to local baseball from day one, joining Pepsi's Jr. Mariners fan club and enjoying sweet swag like this iron-on patch. (Image not mine, though I owned one or two back then.) 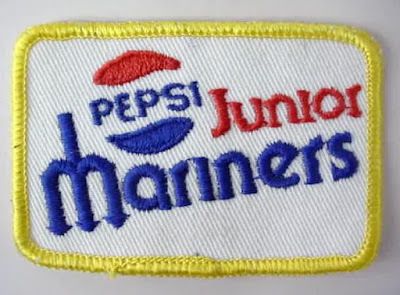 Seattle charged $3 to join those Jr. Mariners in the early 80s, a tough-to-beat deal for bleacher seats at seven MLB games. While the M's no doubt expected parents to drive kids to games and increase their overall take, those adult seats cost just $2.50, not a big payout. 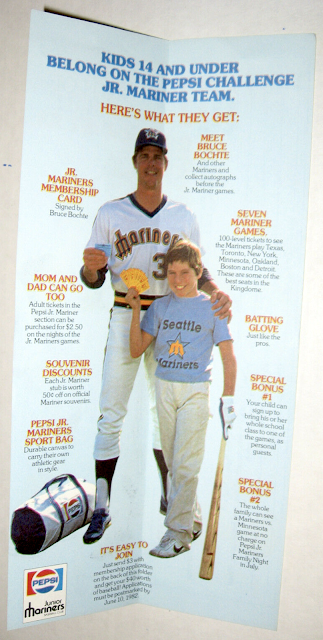 As promised, I got to be that kid, snapping an outfield photo with Mariner All-Star Bruce Bochte. Dreams come true!


Attending several games each year made me familiar with the Kingdome's sinuous concrete ramps and exterior peccadilloes. This oversized (if distant) 1990s Griffey, Jr. poster shows what popped up around the stadium entries during baseball season. When placed well, fans climbing to upper levels saw them from close, far, and in-between.


Any posters and art stood out because Kingdome ramp designers did little to pep up their gray and featureless concourses. Each incline looked like the next, blending level-to-level upwards into Seattle's often dingy cloud cover.

One expects little from stadium concourses beyond conveyance, so this 1983 piece hints at a larger, unwelcome "design problem" -- easy access off Kingdome ramp edges into open space.


You read that right, three fatal ramp falls in just sixteen months. In those days, Kingdome exterior ramp railings rose to about adult chest level, ran a flat foot wide, and then...air. No trouble at all to see a drunk dude try to impress himself by tightrope-walking, with a hard six-to-twelve stories down if you bungle it.

Ramps presented another problem beyond beers and bravado: almost everyone trudged up the whole thing, fit or not.


"There are a hell of a lot of steps and it's a long way up to the top, no doubt about it." That could quote anyone with seats in the Kingdome's 300 level, no pulmonary degree required. As an excited kiddo, I skipped up that first ramp. By its top level, some counted any remaining steps in gasps. 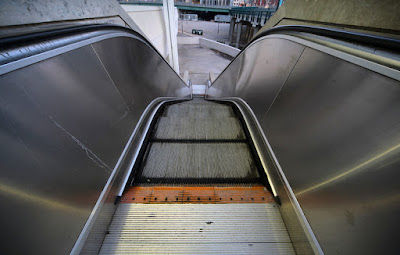 When you visit modern ballparks with bank after bank of escalators helping fans connect floors, think of these endless Kingdome ramps sending medical crews to the top for CPR.

Ghosts of those who perished on ramps inspired something I now understand as an adult: The 1980s Kingdome "falling guy." For several years before those Griffey Jr. concourse posters, at least one level 300 concrete post sported a 30-foot-tall stick figure doing this. 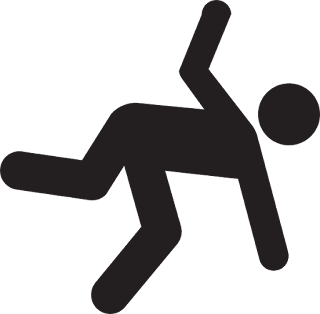 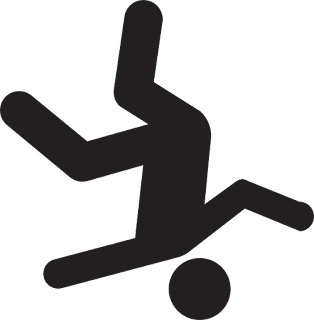 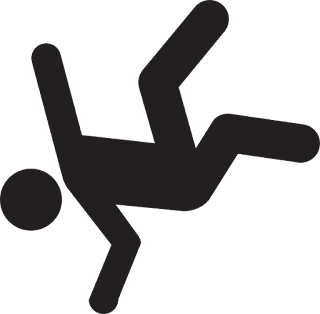 In other words, someone with authority over Kingdome decor decided to warn people with these midair consequences of testing your balance after some beers. No text accompanied this falling guy, so you can debate whether this qualifies as a serious warning or macabre pop art.

As a kid, I knew nothing of people dying on its ramps, so Kingdome's falling guy became my earliest concrete memory of black humor. Imagine Seattle's facility administrator taking the trouble to design this person spinning to their death and posting it where thousands of fans would see it coming and going to their fun night out. "Nothing lasts forever, people," falling guy says, "this could be you, someday."

Falling guy met his own end, in the end. By 1990, the Kingdome beefed up those exterior rails, replacing "walk-on-me" flat surfaces with peaked dividers, and replaced the doomed descent with sports-oriented posters and banners on interior posts. Despite an earnest search, I remain unable to find photo evidence of falling guy's stick art, as almost no-one wasted film on those bland interior concourses.

Until a day we find such photos, many other Kingdome classics exist, inside and outside the stadium. This Pinterest board features more than 200.


Many fans, myself included, came to its last Mariners home game on June 27, 1999. Fellow attendee Pete Hanson's site shows several photos from that season, with this past-to-future look across from Kingdome's top ramp to Safeco Field.


And then, as we said goodbye to falling guy, Seattle sent the Kingdome to its end, imploded in 2000.


Fans feel complicated nostalgia for Seattle's concrete bunker the way Houston wonders how to honor its mouldering Astrodome and Oakland (I think) looks forward to missing its Oakland-Alameda Country Coliseum. Massive, multi-sport stadiums will never be classic ballparks and yet it's where you watched great things happen. Your mind tells you to move on to newer things and your heart... 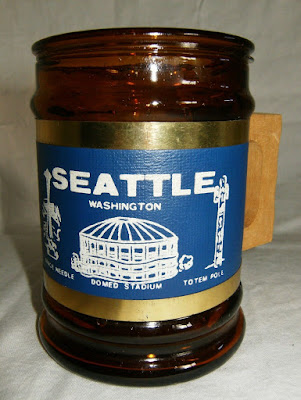 Your heart buys stuff like this. Have to drink from something, right?
Posted by Matthew Glidden 3 comments: