This week, a wolf in sheep's Orioles clothing arrived at my front door. 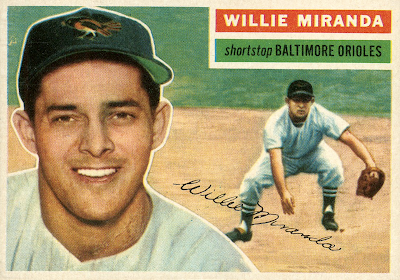 A friend of mine sent 1956 Topps #103 Willie Miranda to help chip away at my variations wantlist. I added 1956's white and grey backs this year to inject some life into my postwar collection and Miranda's white back fits the bill. Let's check it out. 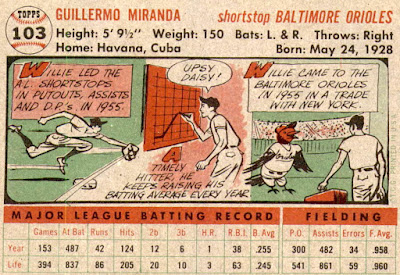 Always fun to examine stats and cartoons, right? "Upsy daisy!" There's one you don't hear in baseball. And then... 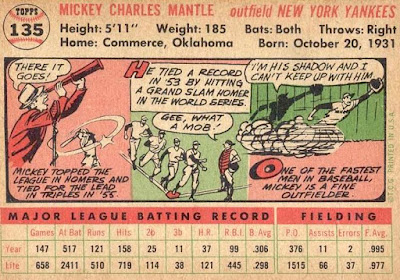 The Mick shows a "both" like we expect. This is discomfiting. Did Topps let something simple like switch-hitting consistency fall between the cracks? There's one way to find out. Let's run through them in order. 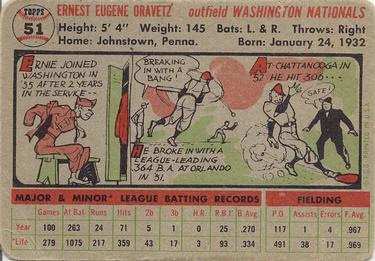 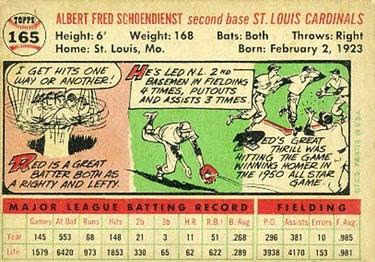 #165 matches Mantle. Now we have multiples of each. 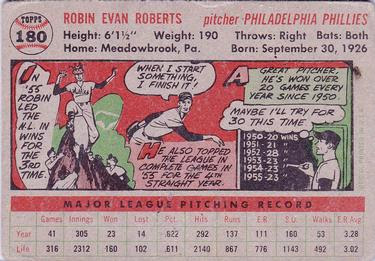 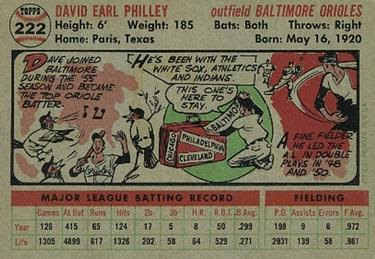 Dave Philley gives me a growing sense of "both" consistency. Perhaps "L. & R." ended with Oravetz and Miranda. 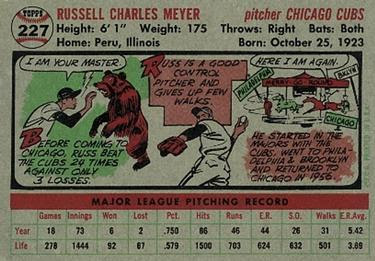 Another "both" switch-hitting pitcher! There's a book waiting to be written about these multitalented gentlemen. 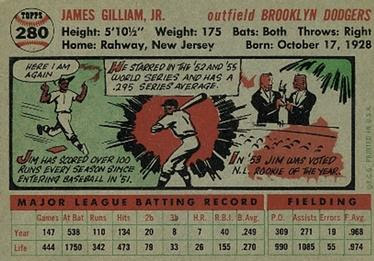 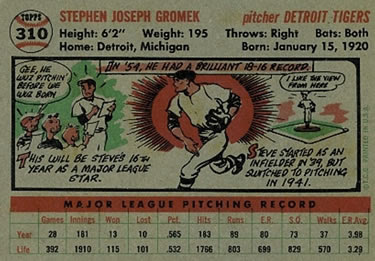 Our third both-hitting pitcher, Steve Gromek, would've been 100 this year. I have to ask about that middle cartoon. Is 18-16 a brilliant record? His stat sheet shows a solid year, but 1955 Gromek also led the AL in homers allowed, the majors in balks, and struck out just 102. I'm glad we're focused on how he hits.
One to go! 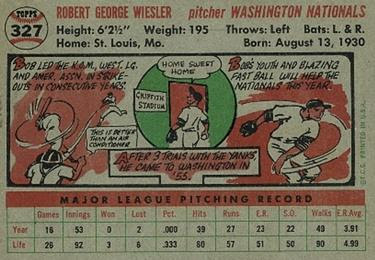 Whaaaaa--Topps throws me their best curve with an "L. & R." switch-hitting pitcher to cap the set. After hitting a nice groove, 1956 Topps fell back into its Oravetz-Miranda ways right at the end. What a Wiesler.
For a set I thought we knew inside and out, finding this nugget makes our hobby's best designers seem more human. Seeing amazing card... 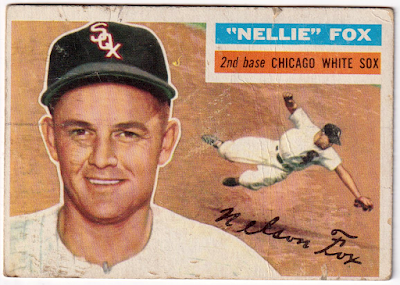 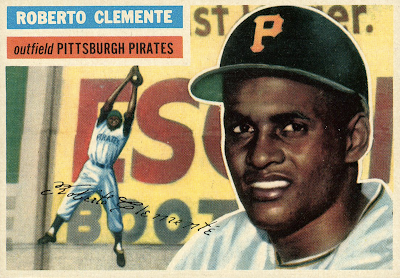 ...and yet with Easter eggs for us to enjoy decades later. (My standards for "amazing" are, "Is a player leaping? Are there outfield billboard ads?")
In search of an explanation, let's check how Topps treated these guys in 1955.
Thanks to their Bowman licensing battle, just two of these players appeared in each Topps set. While Willie Miranda looks the same, Gilliam found yet another way to switch-hit. So much for predictable inconsistency! 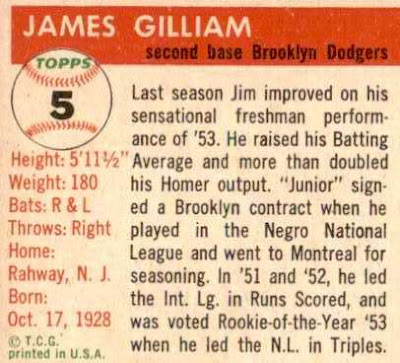 Thanks for following this unusual path with me. I will be sure to think about it the next several times I flip a card over to read the cartoons.
Posted by Matthew Glidden 2 comments:

Email ThisBlogThis!Share to TwitterShare to FacebookShare to Pinterest
Labels: 1950s

George Brace spent sixty-five years of his life behind the camera lens at Chicago ballparks. He shot players at almost every Cubs and White Sox home series, often visiting each park on the same day. His work, both before and after colleague George Burke died in 1951, built an archive of a million-plus baseball photos that continue offering insight to many eras of our national game.
That the same guy photographed Lou Gehrig and Cal Ripken is jaw-dropping in baseball scale.
Oh and also the other Cal Ripken. This was the one I could tie to Brace. :-)
While MLB teams and players purchased many of Brace's photos for their own use, evolving technology allowed Brace himself to create direct-to-collector sets in 1974. He and Bill McAlister formed The Card Collector Company to sell batches of colorized photos from his extensive archive of negatives under the name Bra-Mac.
This first group of eight grew into 288 total, all with a design that's unique to Bra-Mac. Note these colorized photos are distinct from the black-and-white Bra-Mac NL All-Stars set, which profiled National League players from 1933's All-Star Game.
After releasing their largest set of 288 colorized 1930s photos, Bra-Mac made several smaller, team-specific sets. Today's #5 hails from their "1931 Philadelphia Athletics" series.
Each of Bra-Mac's colorized cards use photo paper and show what appear to be Dymo label nameplates and two pinholes. 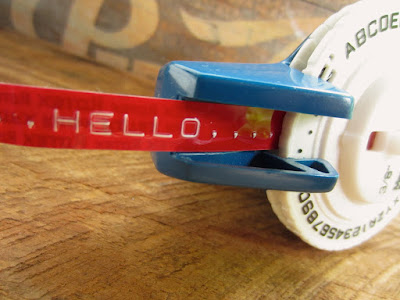 Everyone else remember Dymo labels? If you don't, see this retro write-up.
That's not a real Dymo label on my Al Simmons, it's a photo of a Dymo label. I believe Bra-Mac followed this process creating each card.
All this handwork explains why he charged $3 for eight photos when Topps sold packs for a nickel. If Bra-Mac moved enough sets, they'd make a profit at some point. You just need patience, developing materials, and sufficient collector demand.
George Brace wrote a short article in The Collector Talks newsletter about these colorized Bra-Mac sets and some of his history working with George Burke and MLB players. 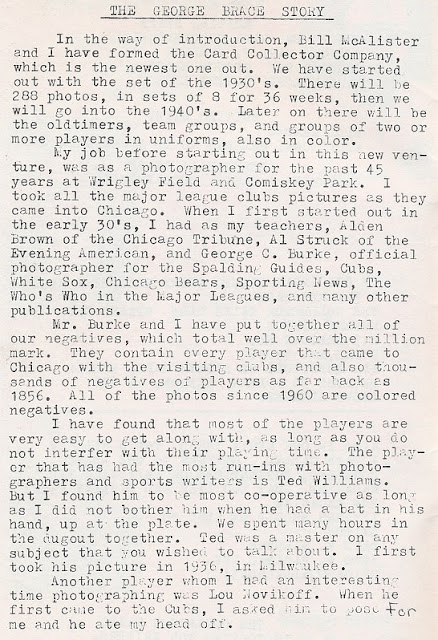 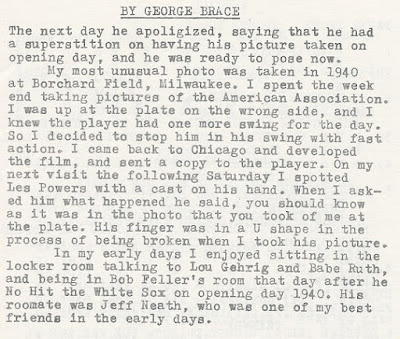 I found these ad and article scans in a Net54 discussion of Brace and his Bra-Mac work. As mentioned in that thread, nailing down a checklist for these cards proves tough, even today. I know of these via catalogs and other collectors.
Max Lanier shows relative size for some of Brace's formats and his large photos appear to be scarcer. 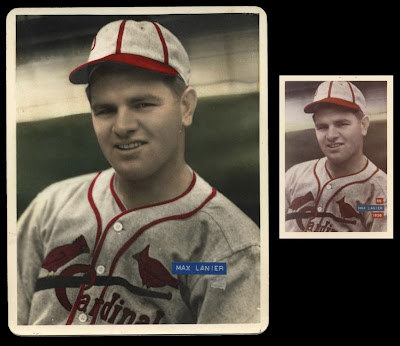 As of this writing, I own about 20 of the 3"x5" "Players of the 1930s" and type cards from a couple of other sets. When (and if) in-person card shows come back from COVID, I look forward to hunting oddball and photo dealers for more.
Has anyone made a serious run at completing these sets in the 21st century? Let me know if you have! Check out George Brace's obituary for a bit more on his life.
UPDATE: Found a card of George Brace himself! He caps the 149-card, 2003 set of Jewish Major Leaguers, a comprehensive direct-to-collector issue of Jewish baseball players and figures important to the game. Brace's daughter contributed a number of its images from their archive. 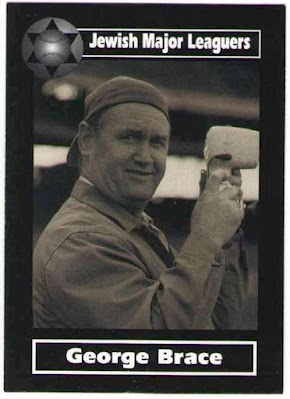 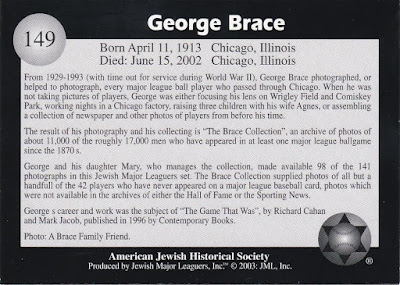 Value: You can find common players for under $10 on eBay and other card sites. I bought #5 Al Simmons for $40 and another #5 type for $10 from Larry Fritsch Cards, who I believe purchased Bra-Mac leftovers from George Brace decades ago and continue to sell them one-by-one. Search their downloadable catalog for "Bra-Mac" to see those listings.
Fakes/reprints: Bra-Mac photos are so unusual and little-known that it would be tough to find willing buyers for reprints. That said, there's always a chance where Gehrig or Ruth are concerned. Based on the cards I own, look for real photo paper and glossy finish. I haven't seen any Bra-Macs that used card stock.
Posted by Matthew Glidden 2 comments: 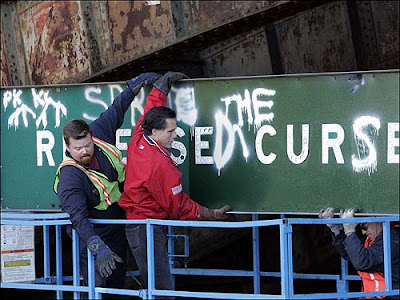 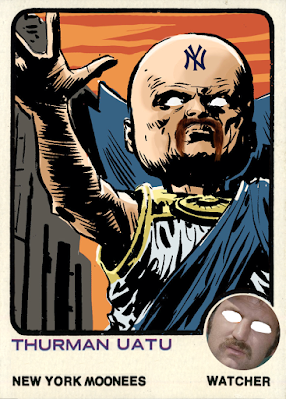 Anyone add some baseball flair to their Halloween?
Posted by Matthew Glidden 2 comments: