It doesn't get much more bonus baby than this shot of Sanford Koufax. His jaw line's yet to refine, facial hair seems non-existent, and that banner might as well say "YOU'RE SIXTEEN!" (He was actually 19 at signature date.) 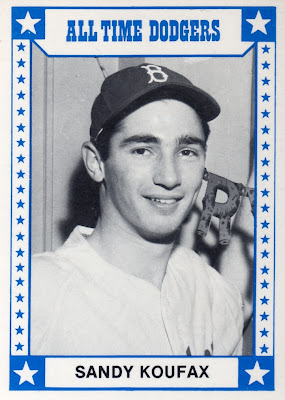 Card front
Brooklyn's 1st contract paid Sandy both a $6000 salary and $14000 signing bonus. By 1955 labor rules, the big bonus also meant keeping him on a major league roster for at least 2 years. Any attempt to send Koufax or another "baby" to a minor-league team would mean a trip through waivers first. (This encouraged teams to spend their bonus money judiciously, since waiver claims only cost another team the player's remaining salary.)

Koufax rode the dugout pine for a few months, in part to work on his wildness, but finally debuted in mop-up duty on June 24th against the Milwaukee Braves. He made none other than All-Time Giant #5 Bobby Thomson his first strike out. 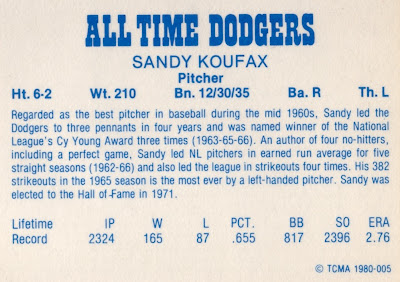 Card back
Like TCMA's other All-Time teams, this 12-card set includes 8 position players, 3 pitchers, and a manager.

Dazzy Vance led the NL in Ks for 7 straight seasons, pitched 600 more innings than Sandy, and still had 300 fewer strike outs! Few have--or ever will--reach the heights Koufax hit from 1961 to 1965.


Value: CheckOutMyCards.com lists singles from this set for $2 or less.
Fakes / reprints: Haven't seen any in the market.
Posted by Matthew Glidden