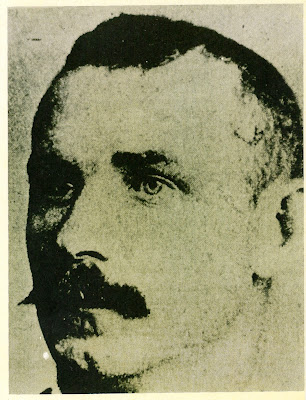 Card front
Based on what I've read, Capital Publishing wrote a short biography pamphlet for each player, so a "complete" set would include both card and bio. Unfortunately, it's unclear how many really exist! SCD's annual catalog numbers them to 104, with #102 labeled "unknown." Others claim a checklist of 110 or more. (I've only owned this Connor card, so welcome input from a set collector.)

It does seem that Capitol released cards in bunches, perhaps as they sold enough to pay for more materials. The company's small size contributed to our limited info now, since fewer employees meant fewer people who could save printing details for future collecting generations. 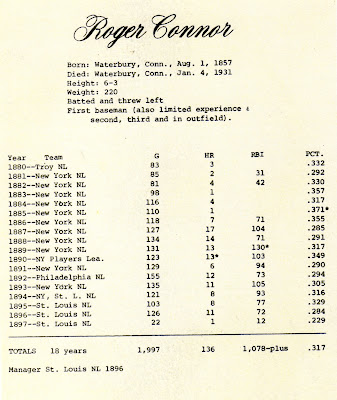 Card back
Connor's best known for hitting 138 homers, the career record Babe Ruth broke on his way to 714. (Current stat records differ for several listed seasons, adding 2 homers and almost 250 RBIs.) By the time Roger died in 1931, Ruth already hit more than 500. Consider a 21st century record-holder watching their mark fall six times over! You can see why "Ruthian" remains a powerful term, more than 80 years later.
One curiosity of this particular card: there's no explicit #5! Originals should include a "Number # in a series" tagline on the back, so I assume this is a reprint, probably done by Capital itself after-the-fact. (Unlikely anyone else would take the trouble, given its lackluster appearance and low value.)
Value: Connor cost about $5 on eBay in 2006. I've seen superstars listed at $10 or more.
Fakes / reprints: Capitol printed multiple runs of cards starting in 1974, so it depends what you mean by a "reprint." My scan comes from a later run that lacks numbering.
Posted by Matthew Glidden