For most collectors, baseball means stackable, sortable 2" by 3" rectangles of cardboard. Topps prints an apparently unending supply these days, year after year, reliable as death or taxes, with competitors Panini and Upper Deck major factors in other sports. While this hardly excludes other shapes, even the word "card" implies something squared-off and angular. Today's #5 eschews both descriptions. 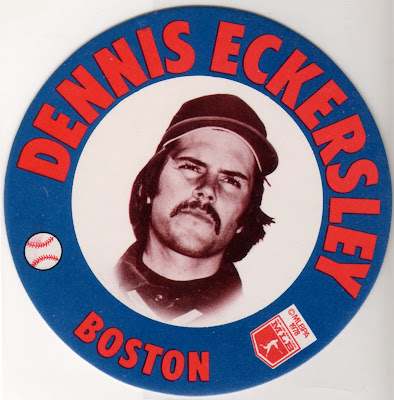 Card front
Rectangle cards remain primary, but aren't the only kid on our block. Turn back your clock a bit and remember that new discs turn up every decade or so--four specific eras come to mind.
Pre-war disc sets also exist, usually as dessert or snack lids that kids pulled off and (ideally) hung on to. They're close cousins of cereal box panel and other food promo sets, since nothing about Papa Gino's pizza or raisin bran explicitly says "baseball." 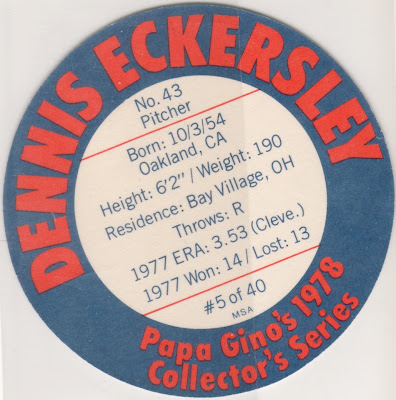 Card back
MSA (Michael Schechter Associates) is the same maker who licensed a larger version to advertisers in 1976-1977, including Pepsi's 1977 capliner cards (#5 Mike Hargrove profile). Papa Gino's sponsored this 40-player set and customers could get one (or more) with each meal. I assume it proved successful, since they turn up at shows and online frequently.
Value: Complete sets list for as little as $20, so singles should cost a few dollars at most.
Fakes / reprints: This would be a hard set to reproduce, given low collector interest and value. I haven't seen any in the marketplace.
Posted by Matthew Glidden