While the White Sox didn't capture a World Series between 1917 and 2005, they fielded plenty of strong players and teams. 1959's squad won 94 games and captured the AL pennant, but lost a close 6-game series to the Dodgers. How close? LA won three of their games by four runs total. (Dick Donovan lost 3-1 in game three, but came back to save game 5 just two days later, preserving a 1-0 victory over Sandy Koufax.) 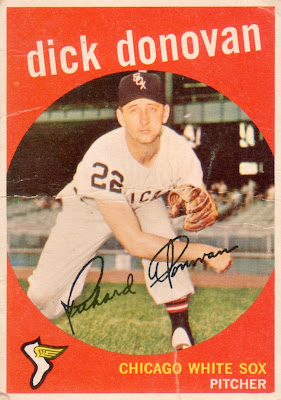 Card front
I cannot help comparing Mr. Donovan's expression to Droopy Dog. Perk up, man, you're the top righthander on a pennant-winner! (He and southpaw Billy Pierce paced the staff with 122 and 137 ERA+, respectively.) Dick's jersey prominently displays 22 on the shoulder, a design introduced in the 1950s and nicknamed "TV numbers," given the sideline placement of most cameras. 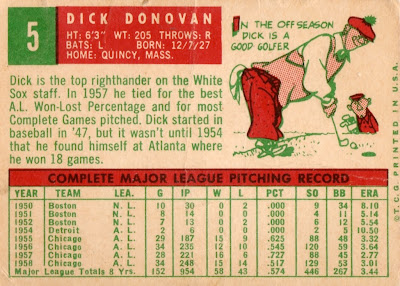 Card back
Back when many players held down off-season jobs, being a good golfer was more unusual. These days, just about every pro can afford to play regularly from Oct to Feb.

Value: At shows, you'll find low-grade 1959 singles in 50-cent and 25-cent boxes. Nicer condition cards go for $1 and up.
Fakes / reprints: Topps reprinted plenty of 1959 star players, but I don't think they did the whole set.
Posted by Matthew Glidden