A few years before co-founding TCMA, Mike Aronstein self-published a handful of sets under the moniker Sports Cards for Collectors. (Some catalogs and sellers shorten it to SCFC.) Most feature old-school players, either hand-drawn or reprinted from vintage photo negatives. Today's "Sport Stuff" set recalls guys who played prior to 1920, the last of whom probably passed away around the time it came off the press. 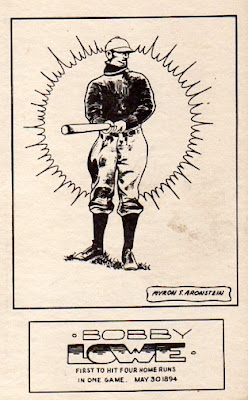 According to a 2009 interview (read it here), Mike's uncle Myron Aronstein drew these originals. Number 5 is 19th-century second baseman Bobby Lowe, who starred for the Boston Beaneaters, ancestors of today's Atlanta Braves (B-R franchise page). Others in the postcard-sized set feature multiple players, like #6 Tinker to Evers to Chance below. 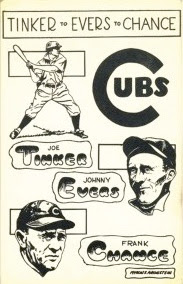 If you don't already know about this classic Cubs infield, check out these set profiles. 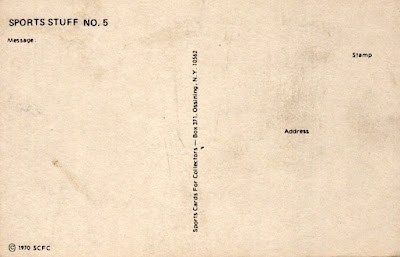 Bobby Lowe played for Boston in the 19th century, a truly different era. The year he hit 4 homers in one game, their lineup averaged nearly 10 runs each time out! Many record-keepers cut off "modern" baseball at 1901, given the gaudy numbers put up by early stars. (Five members of Lowe's 1894 squad drove in 100+ runs and two pitchers won 25+ games--yowza.)

Value: This postcard cost $10 on eBay, one of the few I've seen offered singly. Full set closing prices at auction sites range from $70 to $100.

Fakes / reprints: Doubt there's enough demand for reprints, but it wouldn't be a hard set to fake, so look for authentic wear and know your dealers.
Posted by Matthew Glidden