As best I can tell, baseball existed in Cuba as long as Cuba and baseball each existed. Its professional league started in 1878, just two years after our National League. Cubans love to play it, they play it well, and Cuban ballplayers remain touchstones for American political conversation.

When baseball writers first talked about integrating the American game, Negro League star Oliver Marcelle came up as a risky choice, enough so that baseball's HOF site titled their profile, "The Talent and the Temper of Oliver Marcelle." 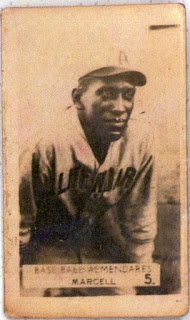 While little-known today in the USA, Oliver played a key role on one of Cuba's all-time teams and local fans will know his name as Americans might memorize the 1927 Yankees lineup. (Marcelle did more with a bat than equivalent New York third basemen Joe Dugan, so advantage Cuba.)

This card's back stamp appears to advertise flavored cigarillos from Mallorquina, who used baseball to promote Cuban products much as American tobacco did for decades. This set included 100 players from that winter's three pro teams on a single print sheet, cut along those white print gutters, and distributed players one-per-pack. 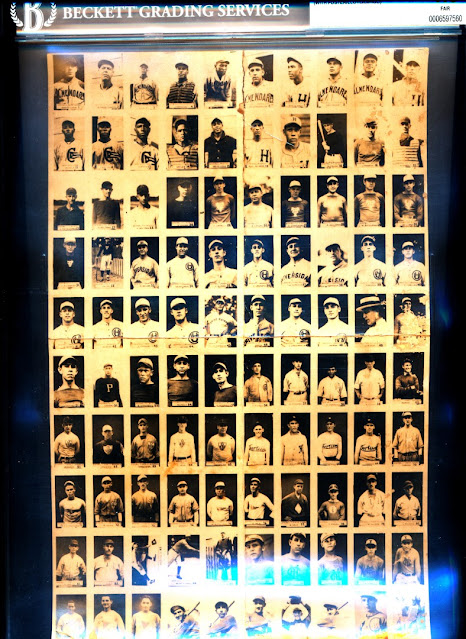 This amazing proof sheet shows the set's flow of photos, grouped by team. Almendares players, with Marcelle at #5, occupy most of its first row. Find a full checklist at CubanBaseballCards.com. 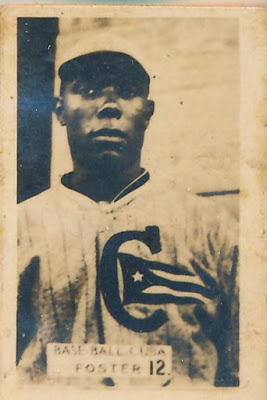 HOFer Willie Foster shows off my favorite league uniform, with Cuba's flag flying from its eponymous C. His squad somehow came in last in that winter's Cuban league, despite being named Cuba.

Value: Singles from this hard-to-find set cost $100 and up, depending on which way the wind's blowing. HOFers could run you a lot more. (I have yet to find #5 Marcelle for my type collection, so borrowed a friend's scans.)

Fakes/reprints: I encouraged the owner of that complete sheet to create direct-to-collector reprints for others to enjoy. While none yet exist to my knowledge, there's a nonzero chance someone reprinted its Negro League HOFers.