The 1964 AL league leaders include a range of players and teams, all skilled with the bat. (Most are known for more besides.) 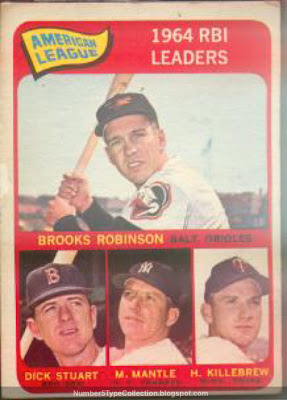 Card front
Topps debuted league leader cards in the 1960 set and they continue to this day. Multi-player cards stretch back significantly further, both post-war and pre-war. As baseball fell increasingly under the spell of statistics, the cachet of plating the most runners or striking out more hitters than the next guy also rose. Hence, I assume, the desire to add this kind of subset to the mix. Perhaps it's also an easy way to get less-than-the-best photos onto cardboard. This LL card shows alternate poses for each player, kind of like home-and-away jerseys. One particular player jumped around enough that we need the Internet just to keep track of things.

Once cigarette cards petered out in the early 20th century, gum companies stepped in to pick up the mantle with their own sugary products. Post-WWII, Topps and Bowman took over the field with large-count sets, echoing Goudey Gum's pre-war success. In both cases, it was hard to tell which came first financially, the gum or the cards, but at least the players are still with us.


Before long, the newly crowned Topps Goliath cast about for ways to expand the baseball market. Enter their subsidiary Bazooka, my childhood synonym for bubblegum. They printed cards directly on gum boxes for trimming with scissors, much like Post cereal sets from the same era.
The 1960 set featured 36 numbered cards and our #5 guest, Baltimore righty Milt Pappis. See this cool proof sheet for a good overview of the set itself, if divorced from the final, gum-protecting product. Relative to their over-sized 1959 set, the three-panel layout made for small individual cards and less impressive photos. Physical limits aside, Bazooka did capture some nice images, and Milt's one of the few that look stoic and static.

Although one of the 1960s' strongest starters, today's guest could've been even better in ideal career circumstances. For all his boyish good looks and pitching acumen, personality conflicts crowded Mr. Pappas like a hard-breaking slider. His Wikipedia entry mentions a number of issues with managers, fans, and umpires, even lingering to the present day. Of course, a greater man than I would be sore to miss out on a perfect game with a walk. At least make the batter work for it, ump!
Posted by Spike Glidden No comments:

Junkballer Ed Lopat made the most of a career in the Yankees organization, winning 163 games in 12 pinstriped seasons. He hurled at least 20 games each season, completed almost as many as he won, and led the league in ERA and W/L% in 1953, the year prior to today's card. The Yanks beat the Bums in 6 games for another World Series win and “Steady Eddie” tossed all 9 innings in game 2, winning 4-2 on the strength of late inning homers by Billy Martin and Mickey Mantle. 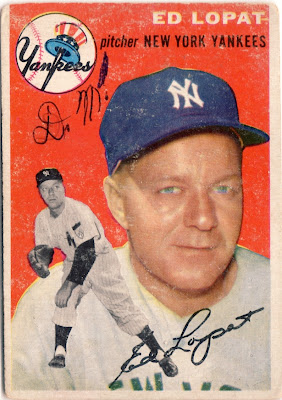 Card front
Note the eccentric top border, an edge-bleed color that overlaps one side of the print row to those above. The printer laid out the 100-card sheet with flip-flopping rows to achieve this effect, something visible in the Topps Archives blog profile. The overall look resembles a mis-cut, though spacing on the other three edges can confirm the centering as good, bad, or ugly. 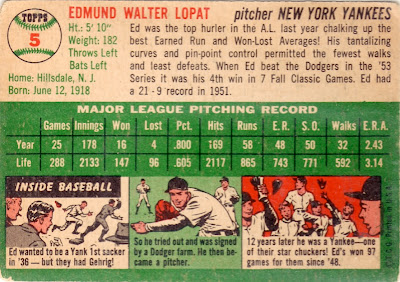 Card back
The 1954 design clearly bridges the early big-card efforts to the mid-50s. Black-and-white body photos accent a tinted portrait against a solid background. This multi-image presentation moved to a landscape in 1955 and included full-field action shots in 1956, but saved full-color for 1957.
Posted by Spike Glidden No comments:

Sherm Lollar played catcher in the AL for 18 seasons and 4 different teams, starting with the Cleveland Indians in 1946 and finishing with 11 quality years on the (as pictured) Chicago White Sox. He made 7 All-Star teams and garnered MVP votes in six different years. Several skills stand out as even more valued now than then. 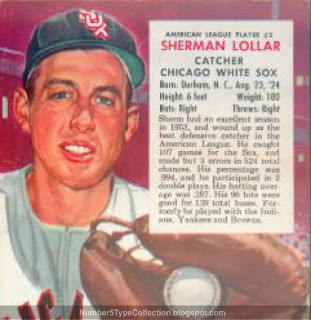 Germane to the type collection, Mr. Lollar managed the Tucson Toros for a couple of years in the early 70s. Yes, the very same team of the worst uniform ever (and not just in Arizona). Viva Toros!
Posted by Spike Glidden 1 comment:

This is the first player to appear in this type collection that I've met personally. A couple years prior to Mr. Burdette's death from lung cancer in 2007, he toured the New England area card shows, signing pictures and cards for $10 each. (My dad, a childhood Braves fan, received the Lew-modified 1961 Topps card.) 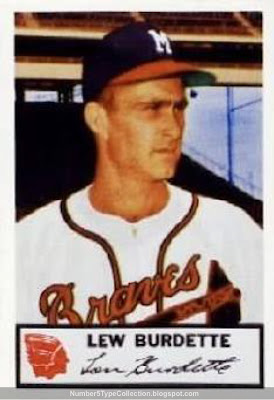 Card front
A few things stood out upon meeting the man himself. He must've been 78 at the time, but damn he still seemed tall, slim, and farmhand strong. Hands big enough to put a curve on a cantaloupe swallowed up my city boy fingers like combat boots eat shoelaces. Sharp eyes, exact facial features, and a rumbling voice completed the image of a former elite athlete in his golden years.

The only weakness on that championship frame seemed to be hearing, as a friend of Lew's did a lot of “translating” by repeating what you said into his right ear. Over a couple of minutes, I got across how important the Braves were to my 10 year-old dad and thanked him for making the trip north from sunnier Florida. Along with Eddie Mathews (by mail), former Milwaukee players make up the only two times I've paid for an autograph. 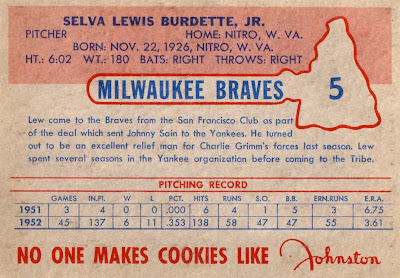 Card back
How about the cards themselves? As you can guess from the example picture, they came with packs of cookies and profiled the local team. Manager Charlie Grimm led off the set and 24 players followed, including the HOFers Spahn and Mathews. See the full gallery for some interesting team photos and myriad neckwear!
Posted by Spike Glidden No comments: