This post follows my earlier in-depth look at Goudey Gum of Boston and its border-crossing partnership with World Wide Gum of Ontario in 1930s World Wide Gum and "Canadian Goudey."
All those events, from baseball's 1933 boom to National Chicle's implosion in 1937, set a stage for why 1938 Big League Gum looks the way it does. 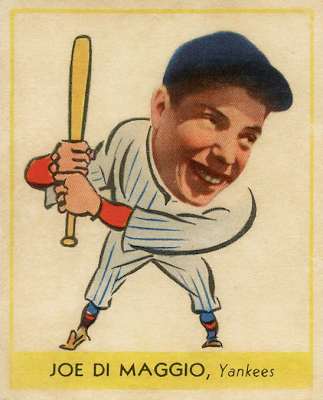 In an unusual move, its next series (#265-288) repeated those selfsame 24 players, in the same order, surrounded by cartoon highlights in a style familiar from 1960s and 1970s Topps card backs. 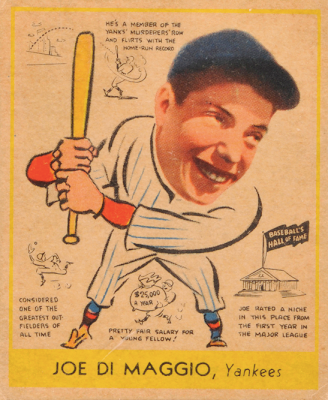 Second series text declared "series of 312," a group of cards that, once again, didn't exist. Non-sport collectors might recognize this mirrors how Goudey sold Indian Gum, releasing one skip-numbered subset at a time over several years, as described on PSA's site, and cross-promoted on 1938 baseball backs.

Goudey overcame mid-1930s gum card fragmentation and competition, much of it from National Chicle, and stood alone in the American card market for 1938. (Again, see World Wide Gum and "Canadian Goudey" article for greater detail.)

While 1938 fronts looks different than most everything before it, can we explain backs declare, "I'm the same?" It's worth figuring out why.

Tweaking this same layout looked to me like "design alternatives" more than a true end-to-end set. Some collectors know Goudey reused other Chicle-based designs in 1939, so what I proposed happened elsewhere soon after. Why not a year earlier on Big League Gum? 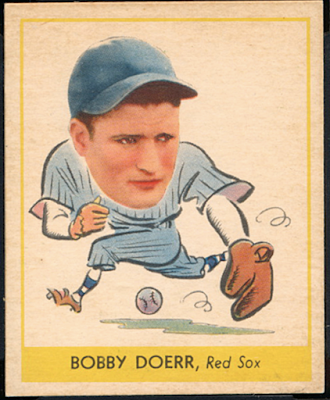 
Even those cartoons came later, leading off with an exciting Red Sox rookie fits the mold for either Boston-based company, Goudey Gum or National Chicle. All three design scenarios remain intact so far. 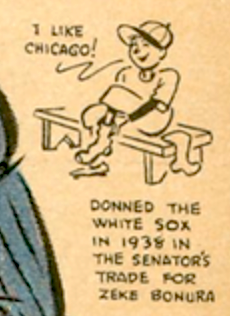 If you know more about all this, want to know more, or just know more than me in general, let me know! Thanks for trekking along another part of Goudey's hobby history.
Posted by Matthew Glidden 4 comments:

As I write this, Cooperstown honors its 2019 inductees, including Seattle hero, Edgar "Light Bat" Martinez. He proved one of the most accessible, personable guys a fan could watch. Still remember learning in the mid-1990s that we shared the same favorite Thai restaurant.


Cooperstown came to mind today as I flipped through the type collection and stopped at my favorite 1960s #5, and baseball's youngest elected HOFer, Sandy Koufax. The Topps wood grain even matches his sun-kissed LA look. 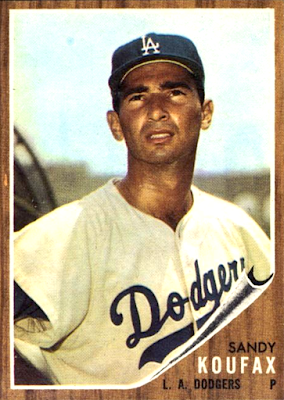 I consider this "photos curling off a rec room wall" design the best of 1960s Topps, with 1964 running a distinct second. (Thanks to league leader cards, Koufax appeared on three consecutive Topps #5s, 1962-64.) 1980s fans will remember a lookalike popped up again 25 years later, before Topps made Heritage sets an official part of their lineup.


I think this date ambivalence served a business purpose for Topps, who expanded their foreign card relationships into Venezuela in 1959. (See related set profiles in my summary post.) 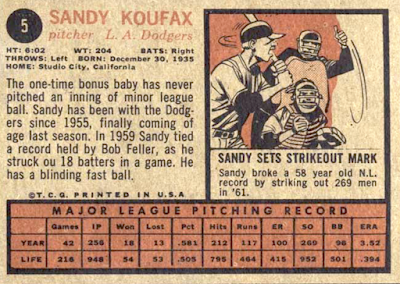 Returning to Sandy himself, Koufax's card bio mentions the financial underpinnings of his erratic early career: Bonus Babies. Brooklyn first signed Sandy to an amateur contract that required he remain a MLB roster player for two full seasons. Without minor league instruction more suited to his youth, frequent wildness in 1955-56 let to a lot of time riding the pine. Frustration with on-and-off pitching duties, despite playing for some great Dodgers teams, led Sandy to almost quit baseball after 1960.


Sandy's breakout 1961 season proved pivotal to the remainder of his HOF career. Without retreading one of baseball's many Koufax biographies, suffice to say he went on to throw the hell out of his left arm in an era that encouraged pitcher overuse. After years of extreme pain management (and extreme success), he retired due to arthritis at age 31, with HOF enshrinement following in his first year of eligibility. 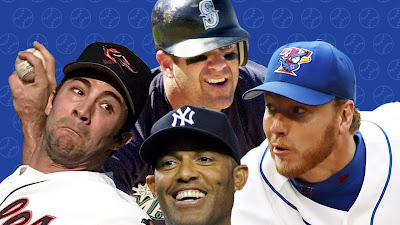 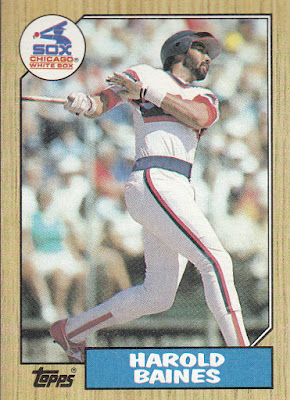 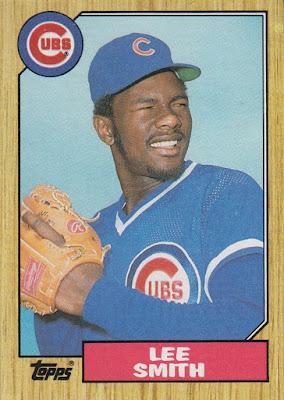 Fakes / reprints: 1962 star cards appear in a number of Topps retrospective and retro-style sets, making them almost as easy to find in modern versions as from the vintage originals. While I haven't seen any actual fake 1962 cards in the marketplace, they could exist for its big names.
Posted by Matthew Glidden No comments: