Artist Bob Laughlin self-published a Great Feats of Baseball set in 1972, after an agreement with Fleer fell through due to Topps own 1971 highlight set. (Catch those details in my Great Feats #5 profile.) They thought better of things a year later and reused many of Laughlin's pictures--now colorized--as the 40-card Baseball's Famous Feats. 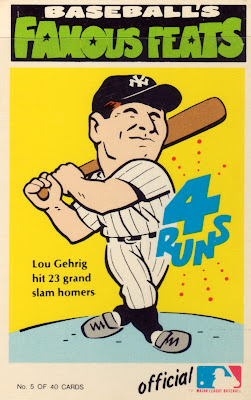 Fleer owned an official MLB license--prominently featured above--but they left out any living players to avoid paying royalties. That also meant a shorter checklist than Great Feats, with no Koufax, Mantle, or DiMaggio.

Some 70 years after his untimely death, Gehrig remains the all-time leader in grand slams, with Manny Ramirez (21) and Alex Rodriguez (18) his closest active competition. One lucky year could include 3 such homers, so both have decent chances to pass Larrupin' Lou. 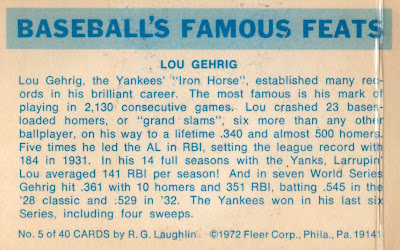 Either Laughlin or Fleer added these back biographies, since Great Feats sported blank backs. Many folks assume the 1972 date meant a release that same year, but I trust blog The Fleer Sticker Project's assertion they reached stores in 1973. (Roll call of their releases, 1969-1976.)

Value: Gehrig's a superstar, so runs up to $10. (Find many of its cards at CheckOutMyCards.com, where most cost under 2 dollars.)

Fakes / reprints: This set's sort of a reprint, but I haven't seen any fakes in the market.
Posted by Matthew Glidden

I have several of these still from when I was a kid. Wouldn't mind finding a good home for them.