Various baseball makers tried out metal and plastic baseball coins during the 60s and 70s, such as Topps' debut issue in 1964 (#5 Dick Groat). Similar efforts include Coca-Cola's cap liners and the Salada/Shirriff plastic coins. 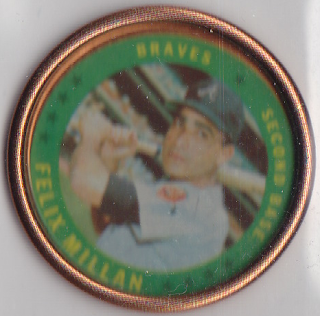 Topps punched these coins from a metal sheet and then rounded the edges to keep kids from cutting themselves. My scanner got hung up on Millan's knurled lip, so here's a clearer scan of one of his more famous teammates. 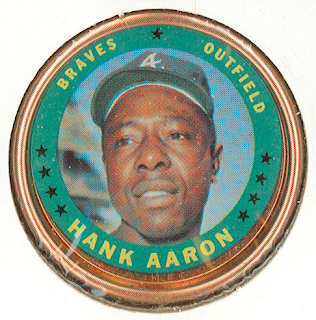 Topps packaged these coins in wax packs of their "regular" 2nd series and even printed a separate checklist as 1971 Topps #161, the first time they'd made such an overlap. 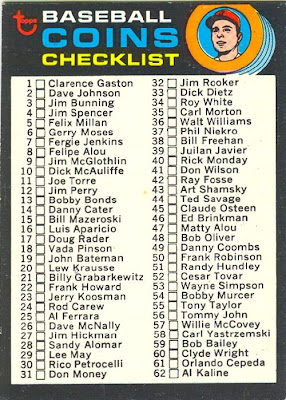 Find just about everything there is to know about 1971's coin color-coding and other set peccadilloes at The Topps Archives' coin posts. (Checklist scan borrowed from its feature article, Post Pattern.) 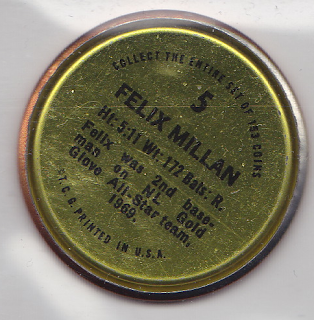 As the tag line says, Topps minted a set of 153 coins, which itself divided into three sheets of 51 players (3 rows of 17); uncut proofs pop up occasionally in auctions.

Fakes / reprints: It'd be quite a feat to fake one of these coins and I haven't seen any in the marketplace.
Posted by Matthew Glidden