Orioles Card "O" the Day featured this 1995 Fleer Flair card in 2009 to check in on Moyer's recovery from a series of minor medical procedures. Blog author Kevin averages a new post each day and covers cards from throughout Baltimore's long team history. 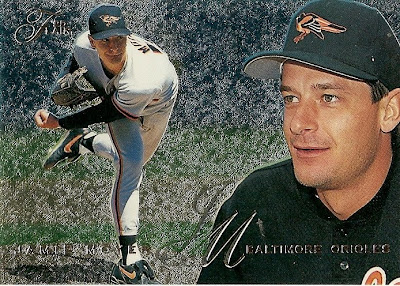 This set came to mind when a fellow OBC collector sent this hit to my David Segui wantlist, 1996 Fleer Flair #313. 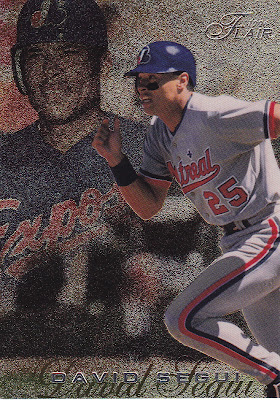 In hand, that speckled background really jumps out at you and Segui's righthand pose has an embossed edge.

Fleer tried some of everything on these Flair cards, going with four different poses per card, each with different framing and photo effects. I like the choice to show players in home/away jerseys, but prefer the horizontal look of Moyer's 1995 card when companies arrange both portrait and action on card fronts. 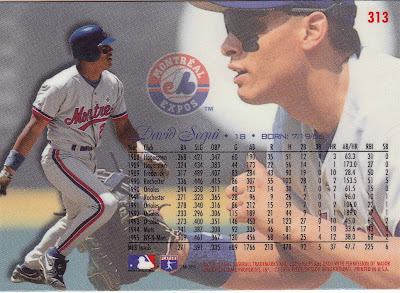 Segui's action shots might be from the same game, as it's clearly an afternoon contest with identical uniforms. Critics of 1990s cards say the crowded design (and, of course, set overproduction) fatigued collectors and eventually killed the market, but I'm happy to have another hit for my player collection.
Posted by Matthew Glidden

I'm a huge fan of mid 90's Flair designs... some of the greatest designs of the decade, IMHO.