20 year-old Canadian righty Robert S. Dean is one of the youngest guys profiled on this blog, but he was already a third-year veteran by 1973, after spending 1971-72 in the Appalachian rookie league (career stats at B-R.com). He's also got a look that says, "wait, is that a camera?" 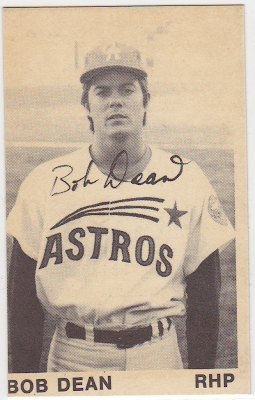 This black-and-white design echoes TCMA's first set, which featured the 1972 Cedar Rapids Cardinals. All of Bob Dean's cards include the autograph, so they must've used a signed photo as its source.

TCMA started their minor league work with annual Cedar Rapids sets from 1972 to 1974. They expanded in 1975 to four Iowa cities (Cedar Rapids, Clinton, Dubuque, Quad Cities) and one in Louisiana (Lafayette). Odd that I lived in Iowa and attended games with my parents during that era, but never ended up with cards myself. Wait long enough and life comes full-circle. 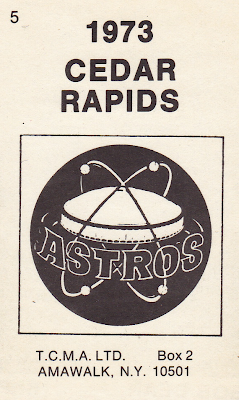 Can't miss that classic Astrodome logo, complete with orbiting satellites. Single-A affiliate Cedar Rapids eventually "launched" six of its players to the bigs; most successful of those is a toss-up between Mike Stanton and Luis Sanchez.

Value: Not sure how many sets reached today's market, but it took awhile to track down this type card, so I assume the answer's "not many." Some sellers price TCMA singles or team sets as rare treasures, asking $10 or $20 per card for guys who never reached the majors. Wait until you see them for $5 or less. As of writing, eBay offers a team set for $20.

Fakes / reprints: Don't know of any 1973 reprints, but TCMA occasionally did so for 1980s minor league sets.
Posted by Matthew Glidden