This smilin' Jay Johnstone postcard, from one of several team sets printed up by LA area photographers Mitock and Son, figures into one of my formative childhood baseball beliefs and one shared with many others: TEAMS DON'T LIKE EACH OTHER. Franchises should seek out rivals to challenge, fight, and beat. Every pitch is a potential bench-clearing incident. Fans have long memories for victories, mishaps, and offenses. That's part of why this postcard looks...wrong. 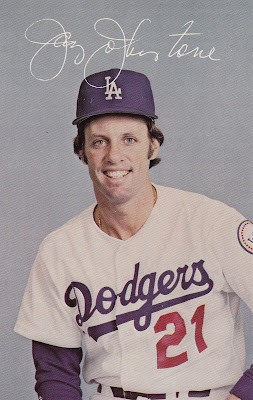 Between 1970 and 1980, Johnstone played for several teams: California, Chicago, Oakland, Philly, New York, San Diego, and Los Angeles. It's hard to imagine a guy with that resume feeling "anchored" to one area, but my young mind only cared about one team in 1978: the Dodgers, NL pennant-winners over Philadelphia for the second straight year.

LA's World Series opponent, the Yankees, included one Jay Johnstone, a man who played only 59 games for the Bombers over parts of two seasons, but did enough to snag a World Series ring that year, over the Dodgers. Jay appeared twice as a defensive replacement without batting, so figured only slightly in the result, but I remembered: JAY JOHNSTONE WAS A YANKEE.

But if Jay was a Yankee, wasn't he also a Dodger? The crazy part is that Jay won another title in 1981, as a Dodger, over the Yankees. He even hit a crucial pinch-hit homer off Ron Davis in game 4, a win that squared the series at 2-2! So why am I stuck on him as a "hated" Yankee? Those six year-old feelings are hard to shake. These days, I have to remember that rivalries are more about nostalgia than records of what really happened on the field. 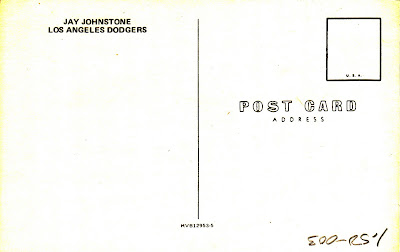 According to scattered Internet sources, the KVB12953 prefix (at bottom middle of the card's back) covers Mitock's 1980 postcard set and these known players.

Let me know if you have others and we'll update the checklist.

Fakes / reprints: Haven't seen any Mitock postcards I'd call a "reprint," though the company might've printed more of each player as long as they stayed with the team.
Posted by Matthew Glidden

The Dodger post cards I have -- which came all in one set -- have the KVB notation on most of them, although some list it at the bottom middle, and some where you place the stamp. Some have the KVB notation but the number doesn't have a hyphen with a single number at the end. Then there's others that say "crocker" at the bottom middle with a picture of an eagle head.

I apparently got some sort of franken-team postcard set.

Thanks, just confirmed the physical card as "KVB" and fixed the typos.

Lots of different Dodger postcard issues out there and several of my Garveys come from the Crocker or no-hyphen sets you mention. Should probably do a separate post delineating what we know and don't know about those 20 years of cards...but wish I had more info to work from! :-)

i don't have any of these postcards, but i believe gary thomasson and derrel thomas are part of the set. maybe bob welch, too.