Coca-Cola covered a bunch of teams with their 1967-68 baseball bottles, each featuring a set of about 15 floating heads sealed beneath plastic cap liners. There's another series of All-Stars from the same period and several players show up in both sets. (Rusty Staub is All-Star #5.) 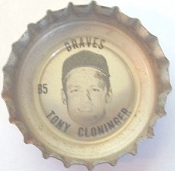 On the 3rd of July, 1966, Braves pitcher Tony Cloninger hit a pair of grand slams off San Francisco pitching and remains the only pitcher to do so in MLB history. 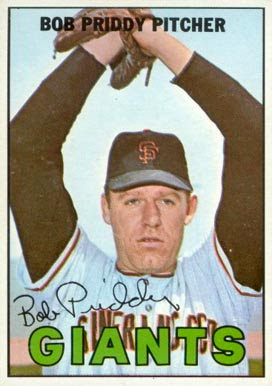 Ray Sadecki mopped up the last six innings of San Francisco's 17-3 loss and gave up Tony's second blast in the 4th. 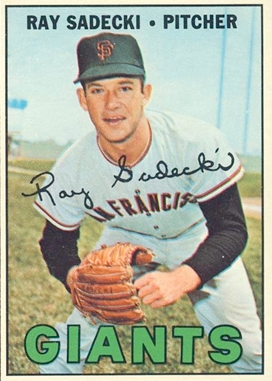 Cloninger finished with 3 hits and 9 RBI, a monster game for anyone, pitcher or slugging outfielder. (Hank Aaron hit "just" a solo shot and probably bought the post-game beers.) Might a guy hit three grand slams one day? If so, it probably won't be a pitcher, making Tony's place in history pretty secure.

Read more about Tony's post-playing career and life in retirement at this retrospective article from DenverNCNews.com.

UPDATE: Some crowns include Tony's position (P) on the right edge. This might distinguish those produced in 1967 and 1968, but I haven't seen enough to know for sure. 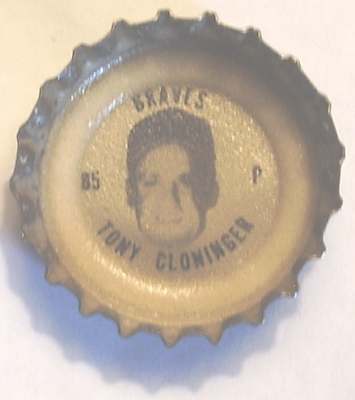 Value: Low-grade Coke caps go for $1 or less. HOFers or commons without edge wear and rust cost a little more. (eBay sellers often ask $10 or more, several times what they sell for at shows.)

Fakes / reprints: It'd be hard to fake a Coke cap profitably and I haven't seen any in the marketplace.
Posted by Matthew Glidden