Let's not beat around a bush with these giveaways. It's time to send someone several dozen Yankee cards.

As with the first giveaway, these cards are from all over the place, and cover quite a range of players. Even guys with famous elbows. 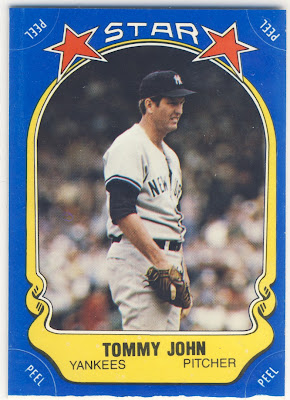 Some of the Donnie Baseball cards include mustaches, but others do not.

There are also several Jeter cards, including this 2009 OPC Black Border. 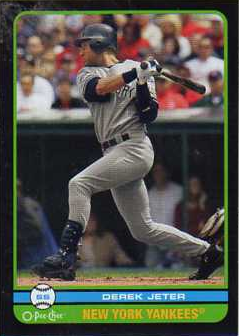 UPDATE: Congrats to winner AstrosFreakCam, who picks up this lot of 70 Bronx Bombers.

MY FAVORITE GAME: By mid-July of 1979, both Seattle and New York sat several games back in their division standings, though at least the (defending champion) Yankees were above .500.

Dad and I went to a Mariners home game on July 11, expecting to see Tommy John pitch and Reggie Jackson swing. We did not expect for Seattle to knock New York pitchers around for 9 runs in the first inning, the final two scoring on an upper-deck homer by Ruppert Jones, which itself followed a two-run triple by Mario Mendoza.

Mariner starter Floyd Bannister spun a complete game 3-hitter, limiting the Yankees to a single run: a homer by future NYY/SEA manager Lou Piniella. Final score, 16-1. (In all the years since, I've never attended such a lopsided game.)

Let me know what NYY-connected games you've enjoyed, from either side of the ledger.
Posted by Matthew Glidden

My favorite game was the only Yankees game I evr went to, where they won 21-4 against the rays. So. Freaking. Epic.

I saw the Yanks play the Rays in 2004. It was my first and only game at Yankee Stadium. What I remember most was monument park. My wife and I stood in line before the game, waiting for the opportunity to see the monuments. We were not disappointed. I was really in awe waling through the monuments, reading the inscriptions, thinking what it must have been like when these were in play. I made sure to rub Babe's head for good luck. It worked, as three months later, the Sox would be champs!

I remember going to my first Yankee game in 1995 against Cleveland, which was also my first baseball game. I don't remember too much about the game, but I do remember being mad that my Uncle's work tickets were behind the home plate netting and that I had no chance at a foul ball.

Thanks to all for entering. I put three coins in a bag, one for each commenter, and...DRUM ROLL...selected AstrosFreakCam as winner for this giveaway.

Here's the box score for his nominated Yankees game, the 21-4 thrashing of Tampa Bay in 2007.

One name I didn't expect to see in that box score was Ty Wigginton, who moved this week (Nov 20, 2011) from Colorado to Philly in a "PTBNL or cash" trade. The Phillies will be Ty's fifth team in six years.