Jamie Moyer (who this blog recently profiled on 1995 Fleer Flair #5) plans to pitch again in 2012 at age 49. Doing so would push him past other 40-something hurlers like Phil Niekro (48), Nolan Ryan (46), longtime Dodger/Ranger/Marlin/ChiSox Charlie Hough (46), and into rarified air with Hoyt Wilhelm (also 49). Since the second wave of MLB expansion in 1969, only those two gents will have pitched so close to 50 years old. 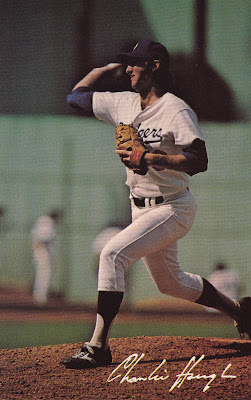 Niekro and Hough threw low-impact knuckle balls, which no doubt helped their longevity. Moyer's also known for soft stuff, with fastballs that top out in the low-80s. All three are polar opposites of the 100-MPH Ryan Express, but if Jamie's plan comes together (and several teams with pitcher-friendly parks DO need mound help), Moyer will need just two seasons to tie Ryan's mark of 27. (He's already level with Hough's 25.)

TRIVIA: Of all pitchers to win and lose at least 200 career games, Charlie Hough leads all pitchers in games finished with 240. In the same category, Jamie Moyer trails all pitchers with just 33. 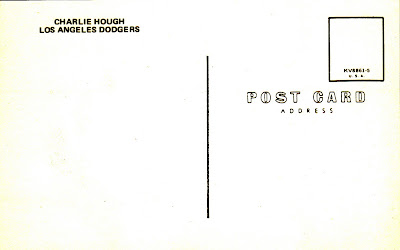 I sifted this Mitock Publishing #5 out of a group of Dodger postcards at a local card show last weekend. They ran several years of similar sets, delineated by catalog prefix number. According to what I can find online, "KV8861" came out in 1976 and includes these Dodger players.


Let me know if you've seen any numbers above 10 from this series and I'll update the checklist.

Value: Hough cost $1, which I considered a good deal. Fan favorites like Lopes and Alston could cost more.

Fakes / reprints: Haven't seen any fakes and I think it's too specific a collecting niche to make money reprinting modern players.
Posted by Matthew Glidden

pretty sure #6 on the checklist is steve garvey. i'm working on a dodger postcard post in the near future.

printing service Chicago said...
This comment has been removed by a blog administrator.
November 10, 2011 at 1:42 PM