TCMA produced dozens of 1970s oddball sets aimed at collectors and small-town fans, but this is their earliest minor league set I've seen with full-color fronts. I assume it went to press with their major league retrospective, The 1960s (#5 profile), so proved economical to print both. 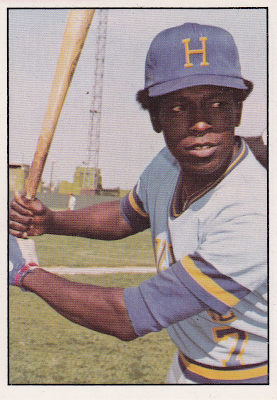 This white-bordered look also calls back to 1953 Bowman Color, the vintage company's initial try at full-color photos in card packs (#5 profile). That experiment proved so expensive, Bowman Gum switched to black-and-white fronts for a late-season series of 64 cards and even renumbered it, a somewhat confusing strategy for issues with similar card backs (#5 profile). 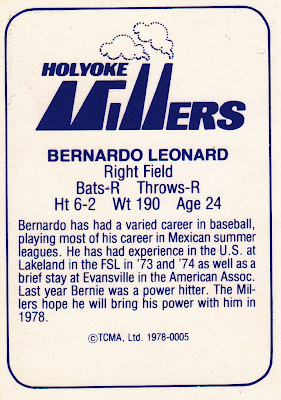 Nice to see TCMA include Holyoke's team logo. It's modeled after the eponymous paper mill smokestacks that lined their town's canal system, first developed in the 1800s. Most of this infrastructure now supports the generation of electricity, a common changeover as railroads carried American industry west over the last 150 years.