Sonny in name and sunny in disposition, Mr. Ruberto made a career of 60s and 70s minor league baseball, primarily in the Cardinals and Reds organizations. True to the "Travelers" name, he suited up for more than a dozen North American teams, bussing all the way from Winnipeg to Sarasota in 1964 alone. 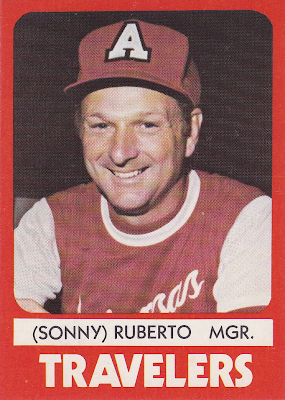 Uniform detail that interests only me: the big A has two serifs at the bottom, but none on top. Unusual typographical choice.

As with the 1978 TCMA Arkansas set, it looks like they caught Sonny at night, or at least with such a bright flash that he's just a silhouette. Card design's otherwise identical to other 1980 TCMA issues, red border with white text. 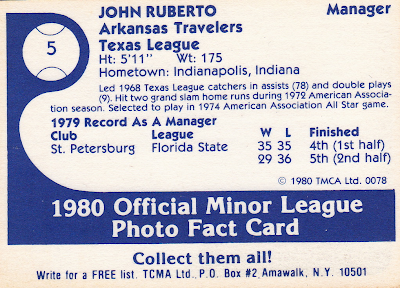 Ruberto led Arkansas to the Texas League's best record in 1980, beating out seven other teams.

That squad's best-known player (now) was another manager, Jim Riggleman, who appeared as the #5 in their 1979 TCMA Arkansas team set.

Value: Sonny cost $5, more than my usual TCMA budget, but proved hard to find, so I made an exception. Most singles from this era cost a dollar or two and team sets run $10-20, depending on player popularity.

Fakes / reprints: TCMA reprinted several 1980 team sets later in the decade, as collector interest in minor league rookies escalated. Those cards used black ink on the back. The blue ink means this card is an original.
Posted by Matthew Glidden