Big thanks to Rain of Error's Mad Guru for a pair of hits to my David Segui wantlist. I've been at this player collection a while, so getting two new ones at once is much appreciated. 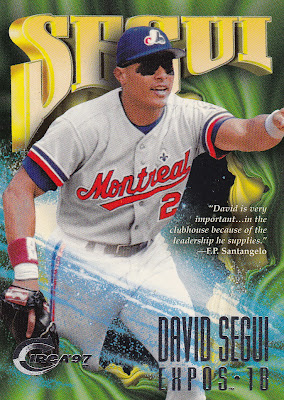 First up, 1997 Fleer Circa Rave. Headline-sized text, on-card pull quotes, and bar charts instead of stat grids? They're the New York Post of baseball cards. 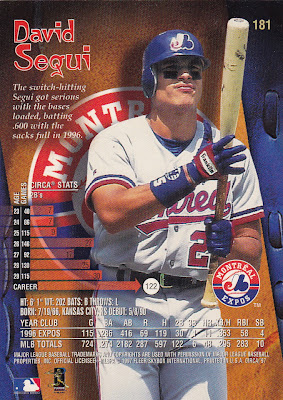 Keeping that card company was 1995 Donruss Top of the Order, one of several 90s attempts at a baseball-themed collectible card game (CCG). 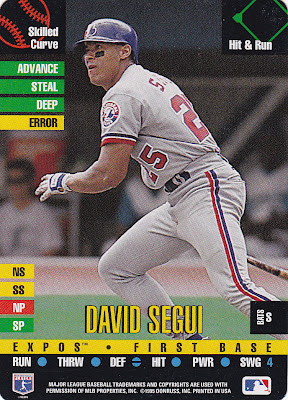 This game set requires at least one starter box, which contains rules, and as many booster packs of extra players as you care to purchase. In most CCGs, people who spend more tend to amass better and more powerful cards. It's a real design challenge to keep all player levels interested. (See a ripped booster at A Pack To Be Named Later.) 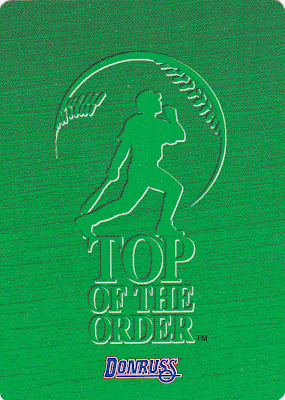 Anyone tried playing Top of the Order? If so, was it fun?

Thanks for the hits, Guru! I've updated my David Segui wantlist to reflect the arrivals.

FREE STUFF: Don't forget you have until the end of Friday, Nov 11, to enter my St. Louis Cardinals giveaway.
Posted by Matthew Glidden

Email ThisBlogThis!Share to TwitterShare to FacebookShare to Pinterest
Labels: montreal expos, thanks