Thanks to the wizardry of eBay, I finally know what this obscure Pacific Coast League team set's #5 looks like. These scans come from the first time one turned up in years of personal searching, foreshadowing a well-above-guide closing price (to be named below). I mean, who wouldn't pay top dollar for that posed catch in a left-field bullpen? 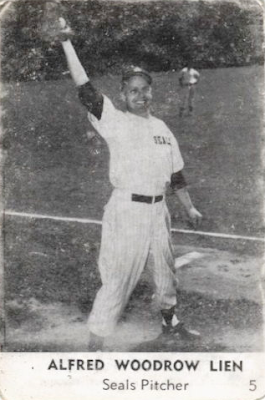 Al Lein bounced around the low minors as a Yankee farmhand during the late 30s before settling in with the San Francisco Seals for a dozen years. He proved a durable arm and averaged almost 40 games pitched during his decade with the team, serving as both starter and spot reliever (career stats at B-R.com). 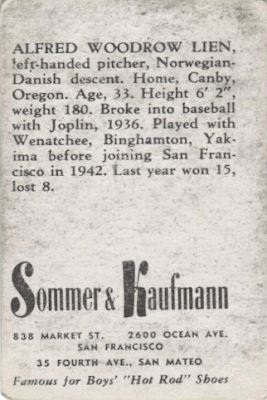 The Bay Area's Sommer and Kaufmann chain, sellers of boys and mens clothing, sponsored this set of San Francisco Seals in the same mold as "competing" team sets from nearby Oakland businesses. (Links go to previous #5 profiles.)

With so few Sommer and Kaufmann singles in today's market, I assume the store printed small quantities compared to Smith's and Remar. Count yourself lucky if you've already snagged one as a type card!

Value: This low-grade #5 closed at $65 in its eBay auction, well above the NM guide price. Enough vintage collectors go after team and PCL issues today to make this a high-demand, volatile set.

Fakes / reprints: Haven't seen any in the marketplace, but they might exist, given overall rarity.
Posted by Matthew Glidden

I saw several of these (cards from the set - not necessarily #5) at the local show last weekend. I probably should have bought one for my collection while I had the chance, if they're that tough to find outside of the SF area. They look a lot like the Remar and Smiths issues of the same period for the Oaks, so I passed figuring I could have found one cheaper (as I did with the Remar and Smiths).

That's encouraging that at least one area has some around. Few show up on eBay, but maybe they're the kind of set that stayed with PCL collectors and fans instead of reaching dealers. Do you remember how much they were asking at the show?

The St Leander show is a great place to find PCL issues for sure. Lots of collectors of PCL cards around here. I wish I remember exactly what they cost but I think it was $10-$20 per card depending on condition.

Al Lien is my great-uncle. He was known as "Lefty Lein" when he played with the Seals. He knew General Douglas MacArthur personally. He was originally from Portland, Oregon. My family still owns the house where he lived.
Mark in Portland, Oregon.

Hi, I came across your post trying to do some research on some cards I've been going through that I collected back in the late 1980's early 1990's. I found a few of which appear to be 1949 PCL Sommers & Kaufmann cards (#9 Leroy Jarvis, #11 Reno Cheso, and #21 Del Edward Young). They look to be in near mint condition, so I was wondering if they were originals or reprints. I'm live in the SF Bay Area and probably picked these up (don't really remember anymore) at a local card show back in the day.

Hi Michael, the handful of Bay Area PCL sets that include Sommers & Kaufmann come on somewhat thinner cardboard than typical cards, with a decent amount of surface gloss, and (in my opinion) good photo quality. Those are the first things to check.

I believe at least one person, or perhaps collector group, reprinted those cards sometime ago as a way to help other PCL collectors obtain images from a scarce set. There's also a dealer on eBay who created modern follow-ups to that era with different years and photos, using the same style.

There are a few ways to get collector help, if you have scans of those cards. Easiest would be to join net54baseball.com and post scans in a thread there with your guess at when you bought them. Hope that helps!