Congrats again to the Birds on the Bat on their 11th championship. My Missourah-based aunt didn't send a commemorative six-pack of Budweiser yet, but I bet one shows up in a stocking at Christmastime.


Speaking of times for gifting, this blog will spend the off-season shipping out variety packs of team cards, starting with the title-holding Cardinals. Each will contain a mix of extra #5s, 2009 OPC, 2008 Allen and Ginter, oddballs, and who knows what else. I'm excited and intrigued just speculating what they might contain. 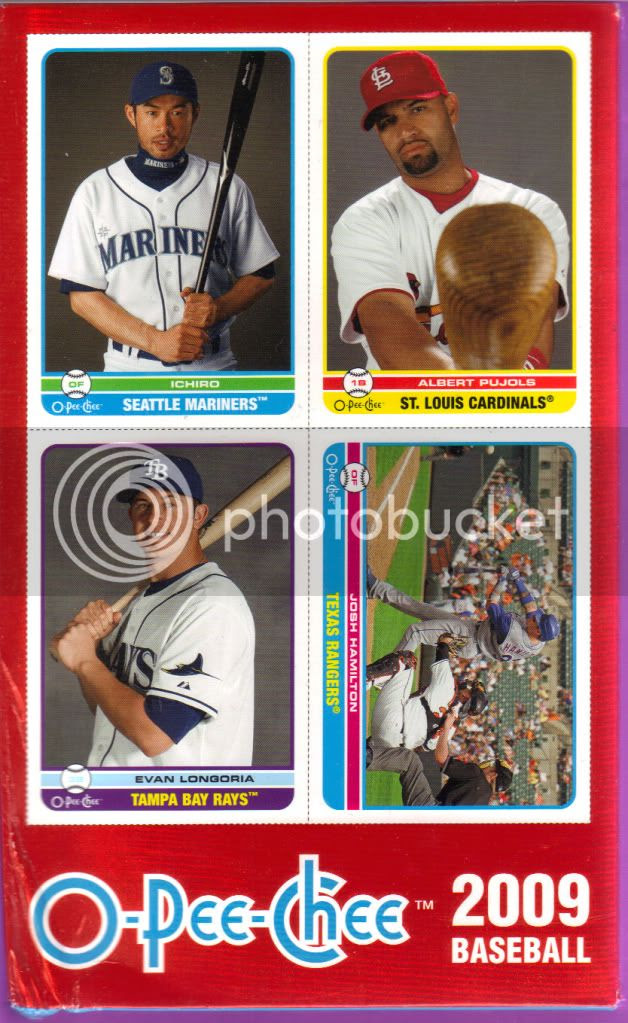 MINOR SPOILER: I'm pretty sure that the St. Louis assortment will have an OPC box panel with Albert Pujols, though not the one shown above (an image borrowed from elsewhere).

WHAT TO DO: Interested in receiving the St. Louis pack? Add a comment with your earliest memory of the Cardinals, a favorite game, or moment that's special to you. I'll pick a winner from entries this Saturday, so you've got a few days to percolate.

MY FAVORITE MOMENT: Former STL greats Lou Brock and Stan Musial attended a Boston-area card show several years ago, the first time I'd seen either HOFer in person. The car carrying them both arrived before show opening, with a bunch of us gathered at the entrance waiting to get in.

Stan got out first, pants hitched up high enough to be a grandfather's grandfather. He sort of shuffled through the doors without much acknowledgement, but who knows how much he could see or hear at the time.

Lou came next and departed the guest van like a president stepping off Air Force One, resplendent in suit, tie, and fresh coiffure. He smiled big, waved big, and acknowledged just about everyone within sight. It was a cool experience, just seeing how much Brock wanted to let us know he was feeling good and happy to meet fans after traveling halfway across the country. Just one of those times that makes collecting fun and memorable.
Posted by Matthew Glidden

Thanks to baseball-reference, I can pinpoint my first real memory:

That's the first game I ever went to. For some reason I just wasn't into sports, but got some free tickets in 4th grade and my family went to the game. As you can see from the box score, we were down 9-0 in the top of the 4th. Of course, I didn't even know who any of these guys were, so I wasn't having a bad time because of it. The Cardinals completed the comeback and won 12-11, and I was hooked on baseball for good.

Going with my Dad to meet Jack Buck when he was signing autographs at a local car dealer was really awesome too, and I still have the 5x7 at my parents' house. At least, I think it's mine...maybe my dad thinks it's his :)

I'm not exactly a Cardinals fan, but I have a great moment anyway. I was in St. Louis for a teaching convention in late March, and I had the next week off (spring break). What better way to spend your spring break than a couple days in St. Louis?

I extended my stay long enough to catch the 2007 home opener. It was right after the 2006 World Series, so the crowd was extremely vibrant. Before the game, there was some kind of street fair, something you don't get at a stadium like Oakland or Atlanta. The game had plenty of ceremonies, and I spent the whole day on baseball, touring the Cardinals museum (with the bowling alley and bowling HOF, right?), and then getting to the park as soon as the gates opened. I purchased one of the numbers used in the out-of-town scoreboard at the old stadium (my favorite stadium "relic", followed closely by some artificial turf out of Riverfront Stadium).

Stan Musial was at the game to be honored for whatever reason, which resulted in an awesome standing ovation.

They lost the game to the Mets 6-1, but I got to see Tom Glavine pitch again, plus a whole bunch of Cardinals I'd never seen in person before. Certainly a great experience! It was my first opening day game (I've only had one other MLB opener, this year in Oakland).