This (young!) card of Hammerin' Hank, a food tie-in photo from his first MLB season, remains one of my all-time favorites, #5 or otherwise. The self-conscious hand-coloring, his broad smile, and Johnston Cookies picture-first design all make it a winner. (It doesn't hurt that I'm from Wisconsin...or that it's Hank Aaron...and a rookie card. Win, win, win.) 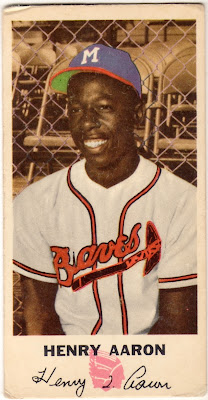 On July 14th, 1968, Hank Aaron slugged his 500th home run off of Mike McCormick in a Braves home win over San Francisco (box score). Team lineups that day included Willie Mays, who hit his 500th in 1965, and Willie McCovey, who hit his 500th a decade later. Few match-ups offer so many members of that elite group!


For all their power--three homer leaders in the NL's top four--the 1963 Giants finished in 3rd place, 11 games back of the pitching-heavy Dodgers. 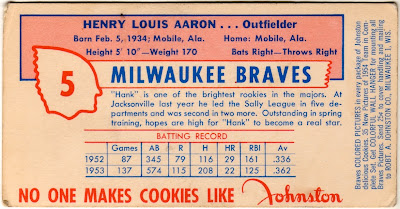 This set numbered its cards by player uniform, so surprised me to see Hank as #5. It's true, though; he wore the number for a single season before switching to the iconic #44.

Milwaukee-based Johnston Cookies included most of the set info in their byline.


Braves COLORED PICTURES in every package of Johnston delicious Cookies. 35 New Pictures of 1954 Team in Complete Set. Get COLORFUL WALL HANGER for mounting all Braves Pictures. Send 25 cents to cover handling and mailing to ROBT. A. JOHNSTON CO., MILWAUKEE I, WIS.

Johnston started distributing the set in early 1954, but withdrew Bobby Thomson's card when he broke an ankle in spring training. This both gave Aaron a chance to start in left field and created a short-print for set collectors. 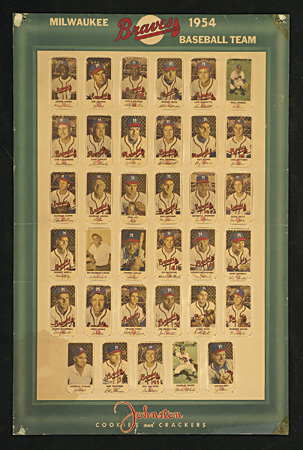 Thanks to Johnston for making such a cool card and to you all for reading! Today's profile marks the Number 5 Type Collection's 500th post.

Value: This Aaron rookie card isn't well-known in the hobby, but still runs well over $100 in low grade. Nice condition versions run $500 and up.

Fakes / reprints: Both reprints and fakes exist for Johnston cards, especially stars like Aaron, Warren Spahn, and Eddie Mathews, so I recommend buying lesser-known players if you want a type card.
Posted by Matthew Glidden

That is one nice card. I do like the regional cards. Congrats on the milestone. May you find many more posts in your binders.

Thanks, Mark! Maybe it can crank out 755 like Hank.

Thanks! I went by the invaluable uniform rosters at Baseball-Reference.

Sounds like 1955 Bowman went with a 1954 photo for Hank's card, or perhaps he switched in spring training.