Today, 80 year-old Jack McKeon officially agreed to take over as interim manager for the last-place Florida Marlins. He's got 15 years of managerial experience and won a World Series with the fish just 8 years ago, so makes a good choice on paper, but 80 years old sets a new standard for modern baseball helmsmen, a fact few sports writers let pass without comment. (And certainly not me!) 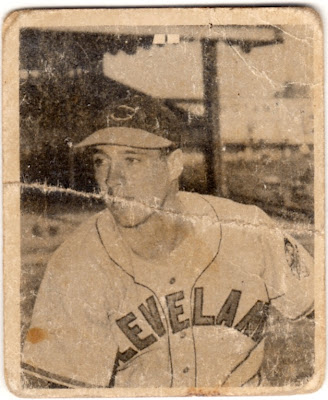 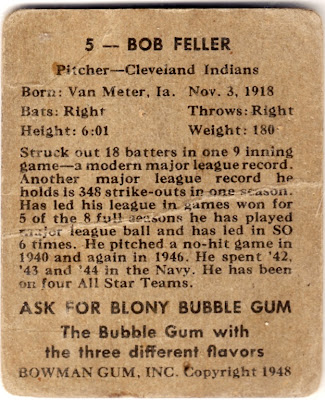 1948 Bowmans don't impress the eye compared to classics like 1933 Goudey (#5 Babe Herman) a decade before or 1956 Topps (#5 Ted Williams) eight years after, but broke new ground as the first major post-WWII baseball set, and thus the beginning of its Golden Era. As the first such set, it's loaded with significant rookie cards (set checklist), including Yogi Berra, Stan Musial, Ralph Kiner, and Warren Spahn. Few of its photos look like much, but at least #47 Bobby Thomson caught a nice swing (and NYG jersey-jacket) by the Flyin' Scot. 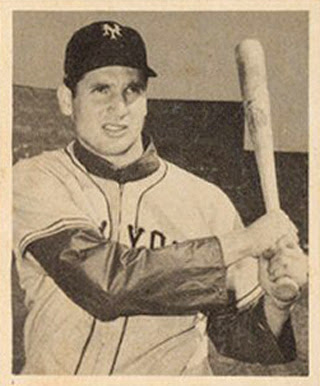 Value: Bob Feller's a big name, so commands $20 or more even in low grade. Non-star beaters cost a few dollars, sometimes more for the short prints.

Fakes / reprints: I assume fakes exist for 1948's big stars and there are definitely reprints of the whole set, thanks to Topps Heritage.
Posted by Matthew Glidden

Matthew-
Shoot an email to me when you get a chance. I have a question for you.
Johngy1 at aol