Only a few collector show promoters in the 1970s could afford Topps-style promo cards, but Philly Show founders Ted Taylor (HRT) and Bob Schmierer (RES) turned out several complete sets starting in 1975. Some issues "extended" older vintage material, such as 1942 Play Ball and 1947 Bowman, while today's stood alone as a tribute to former Philadelphia A's and Phillies players. 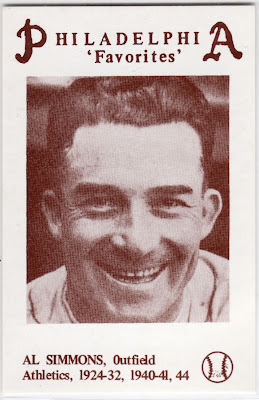 Today's set includes 24 players, many of whom were still alive in 1977 and might've been guest signers at the Philly Show. Card #25 features Connie Mack Stadium, a nice bookend to the issue, as #1 is Connie Mack the manager. HOFer (Al Simmons died in 1956, so you'd never see his autograph on a #5.) 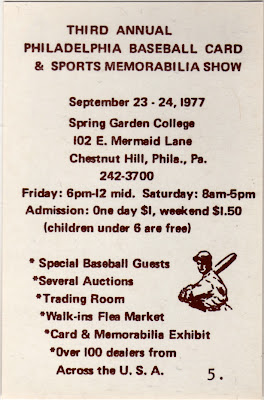 HRT/RES cropped their Simmons image from this 1936 Goudey Premium, which few collectors would've seen back then. Is it ironic that its picture came from his time away from Philly? (Simmons spent 1933-35 in Chicago and even started for the AL's All-Star team each year.) 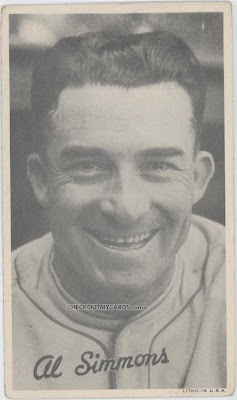 Do you like baseball nicknames? Simmons apparently opened up or "stepped in the bucket" during his swing, so picked up "Bucketfoot Al" early on.

Value: Despite being HOFers, singles cost just a few dollars. (Here's one place to find most of the set cheaply.)

Very cool set that I'd never heard of...I'll have to try and get my hands on the Athletics half.

Glad they caught your eye! I wish my Mariners had been successful enough to deserve this kind of collectors set. We're still trying to find a left fielder who'll stick around. :-)