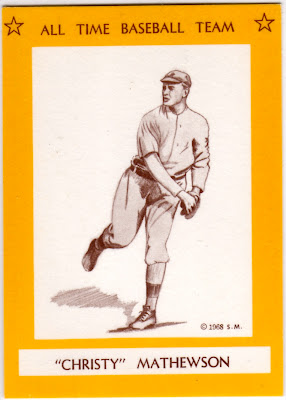 Christy Mathewson had already retired from pitching when the US entered WWI. He enlisted in 1918 (at age 38!) and joined a unit working with chemical weapons (such as mustard gas). Unfortunately for Mathewson, accidental exposure to the gas during a training exercise left him hospitalized and vulnerable to tuberculosis, which he contracted and eventually died of at age 45. 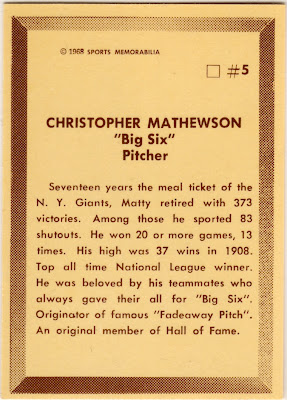 Today, we know Christy's fadeaway as the screwball, a pitch that hooks away from the pitcher's dominant arm. (It's both "screwy" compared to the inward movement of sliders or curves and spins like the thread of a screw.)


"Mathewson pitched against Cincinnati yesterday. Another way of putting it is that Cincinnati lost a game of baseball. The first statement means the same as the second." 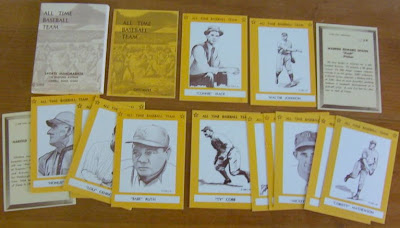 The scan below (cribbed from eBay) shows a complete set, including its paper slipcover at upper-left. Bob Lemke's annual Standard Catalog called this one of our hobby's earliest direct-to-collectors issues, made by fans for sale to other fans.

Sport Hobbyist magazine reprinted some Famous Baseball Cards for subscribers starting in 1963, but that's the only collectors issue I know that precedes this one. Let me know if you've seen a self-made set that's older!

Value: Bought this #5 for under $5 on eBay. Bigger names like Ruth and Cobb cost a little more.