I enjoy fellow blogger Core Contrarian's daily roll of baseball anniversaries, quotes, and players from every era. Each captures a little something of the player, decade, or card design and they're always worth reading. (Lou Gehrig's a recent favorite.)

In that spirit, here's a Contrarian salute to the peripatetic righty pictured on this obscure 7-11 card, who started pitching for Baltimore in 1959, but went on to San Francisco, New York, Chicago, and Cincinnati before hanging up his cleats a decade later. 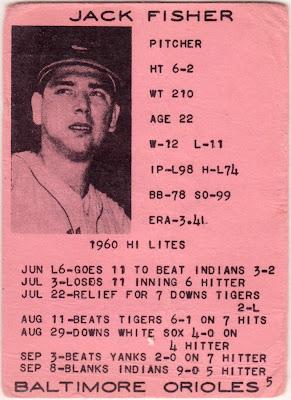 On this date in 1965, Jack Fisher beat Pittsburgh 2-1, raising his record to 5-4. Being the Mets, he dropped 20 of his next 23 decisions and led the NL in losses. Only twice in those games did his New York teammates offer more than 3 runs of support.

Fisher rated not far below league average (89 ERA+) in 1965, so can pin most of his failings on New York's moribund post-expansion era. Al Jackson (1962), Roger Craig (1962, 1963), and Tracy Stallard (1964) all pitched competently but lost 20+ decisions for the Mets in those early years. (Few franchises have even one of these seasons; NYM had five in just four years.) 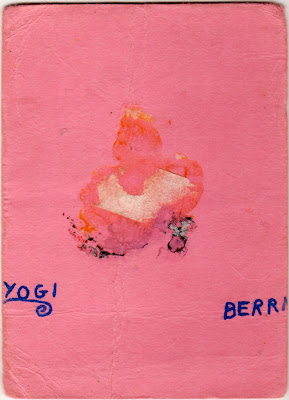 Value: This low-grade #5 cost $10 on eBay a few years ago. I fortunately didn't have to pay a premium for Yogi Berra's signature on the back--such a deal! Roger Maris and Willie Mays prove most valuable at $200 or more for cards in decent shape.

Fakes / reprints: It'd be easy to fake this black-on-pink set, so be careful when purchasing stars and buy from dealers you trust.
Posted by Matthew Glidden