Today's set profile marks the first time TCMA created a team set beyond Iowa's borders, after promoting Cedar Rapids, Dubuque, Clinton, and the Quad Cities (set profile) in 1975 and earlier years. They only produced black-and-white cards until 1979, probably to save printing costs for both the company and their small market clients. 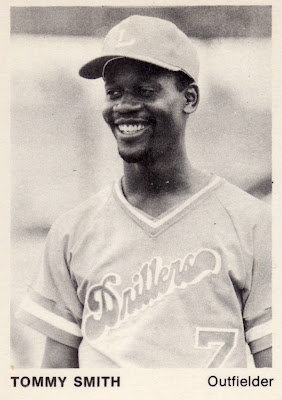 If Thomas Jefferson Smith looks slight, it's because 160 pounds hang light on a 6'1" frame. I once had the same dimensions, which my dad called "scrawny." Thanks, pop! (Guess it's not Fathers Day anymore. :-) 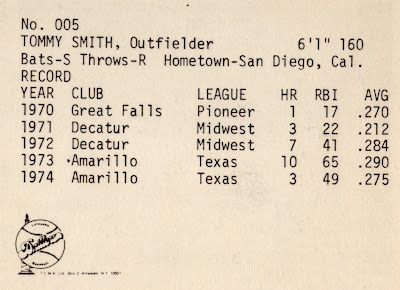 The Drillers played in Lafayette for just two years (1975-76), but managed a 1975 co-championship with Midland, TX. Minor league teams release players to their MLB affiliates by September, so title game rainouts forced a tie that year, a pretty rare occurrence in the league's 100-year history.

Value: Minor league singles cost a few dollars, unless they became a star in the majors later on.