TCMA picked up the pace with their minor league team sets in 1975, expanding from Cedar Rapids (set profile) to Lafayette (Louisiana) and Clinton, Dubuque, and Quad City (all Iowa). Fresh-faced Stan Cliburn, just 18 in this photo, played 27 games for the Quad City Angels, an A-ball affiliate for California, where he went on to play a single MLB season in 1980. (His twin brother Stew Cliburn also played for the Angels, going 13-5 over 3 years as a middle reliever.) 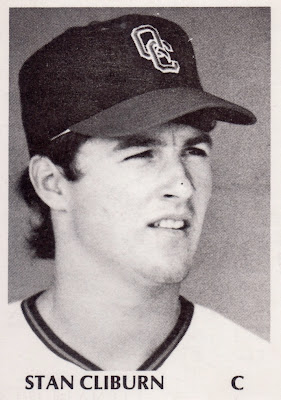 This set's got more than novelty value for me, as I lived in one of the Quad Cities during this very era and saw my first live baseball game at its riverbank park. I can still remember crawling under a fence into the "closed" seating to retrieve a foul ball around age 3, the perfect time for squeezing into places adults can't. (What's got two thumbs, a free ball, and probably nagged his parents to leave by the third inning? This guy.) 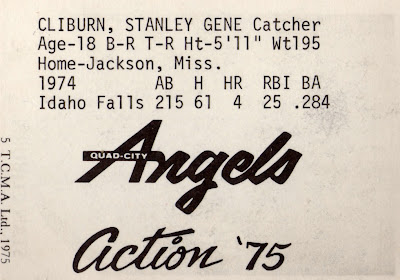 The Quad Cities metro area straddles the Mississippi River, with two communities from Iowa (Davenport and Bettendorf) on its west riverbank and two more from Illinois (Rock Island and Moline) on the east. Baseball's got a long history in the town and built its stadium right on the water. A flood wall surrounds the park itself and elevated walkways lead fans to the stands, creating high water images like this.


Value: Non-star major league singles cost a few dollars. I bought this one from MinorLeagueSingles.com.