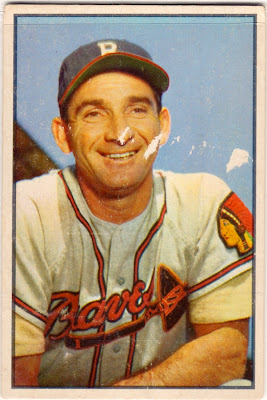 1953 marked a sea change in card production quality, as Topps, Red Man tobacco, and Bowman all tried to one-up innovations introduced in 1952. Bowman made a splash by publishing these full-color player pictures, a first for collectors accustomed to tinted black-and-white photos. (This undertaking proved so costly they switched to uncolored cards for a later series; its #5 featured Dee Fondy.) 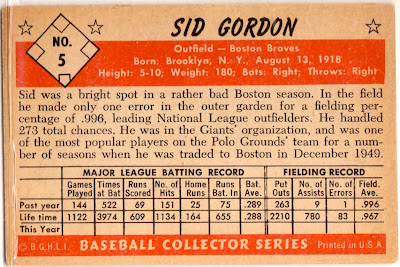 1952's "rather bad Boston season" meant a 64-89 finish, 32 games back of the Dodgers. It was doubly bad for local fans, as the franchise picked up and moved to Milwaukee for 1953, where they won a title--their first in 4 decades--just 5 years later. Ouch.

Value: Low-grade singles cost a few dollars. Mantle, Musial, and contemporary stars run many times that, given 1953's status as a "classic set."

Fakes / reprints: Topps reprinted many Bowman star cards as part of modern issues, so don't confuse newer versions for originals. (Look for modern dates on the back.)
Posted by Matthew Glidden