Today's set features former San Francisco, Cleveland, and Houston farmhand German de Los Santos ("of the saints"), who stands poised and ready for something. It's not exactly a catching position, unless you're expecting something breadbox-sized, like a baby. Dr. de Los Santos, future obstetrician? (Credit Bill Cosby with the mental image.) TCMA started producing these minor league team sets in the early 1970s, typically in partnership with a local business. For Cedar Rapids (Iowa), they picked up McDonald's locations on 1st Ave and Williams Blvd. I can't help but wonder: after almost 40 years, are those addresses still selling burgers under golden arches? For the latter, the answer is "yes." Not sure when the Williams location opened, but Google says it's still there. 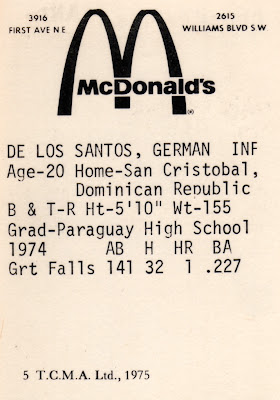 After several years in the infield for A and AA teams (career stats), de Los Santos tried a switch to pitching for Houston. He put up serviceable numbers as a middle reliever, but left American pro ball after the 1979 season, perhaps to continue a career in the DR league. (Check out their recent championship-winning managers for some familiar names, including a Jose Offerman sighting.)

Value: This #5 cost $3 on Beckett Marketplace. Singles vary by team popularity and seller, but most go for less than $10.

Good to see a card from my old hometown team. Were the Reds by the time I got to go though.

Good news, then, there's more to come! TCMA produced more Cedar Rapids sets that any other team in that decade. (The 1980 team is after they became the Reds, too.)

Here are two I covered before: