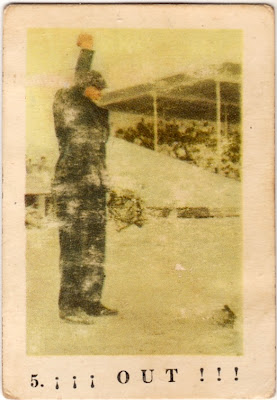 You don't often see an umpire divorced from a play's context like this. We can be sure, though, that someone is OUT by at least six punctuations.

Puerto Rico offered greatly reduced racism (perhaps none at all?) compared to the American majors, so its winter league attracted many of the best African-American hitters and pitchers. This card of HOFer and Negro League legend John Gibson appears in the unnumbered Toleteros set, a parallel of sorts to the "Action" scan shown above, which used on-field photos. 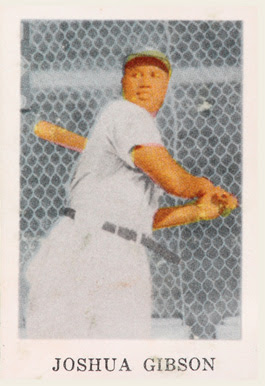 Total set size is 192 players and 180 action, a considerable effort for that era. Backs are blank, I assume to allow for mounting in the accompanying album.

Value: Action singles like "OUT" cost $5-20, but run more for recognized players. (A handful of the action cards feature HOFer Willard Brown and cost several times that.)

Fakes / reprints: Haven't seen any fakes of this obscure set, but it's a risk for players of Gibson's stature. Buy Latin American cards from dealers you know and trust!
Posted by Matthew Glidden