TCMA and Cramer produced the lion's share of minor league team sets during that market's mushroom growth in the late 1970s, but others popped up here and there, thanks to individual team popularity or marketing creativity. Today's effort doesn't break any new design ground, but did help a AAA city connect with hometown fans in a new way. (Ditto 1975 Phoenix Giants #5 and others.) 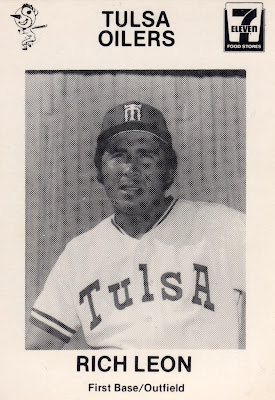 On the heels of back-to-back American Association titles in 1973-74, Tulsa and 7-11 co-produced this team set for the then-Cardinals AAA affiliate. A pretty amazing percentage of that season's roster reached the majors, including future stars Keith Hernandez, Larry Herndon, Jerry Mumphrey, and John Denny. (Unfortunately for Rich Leon, he's one of a handful not to get the call, despite a respectable .836 OPS in 106 games.) 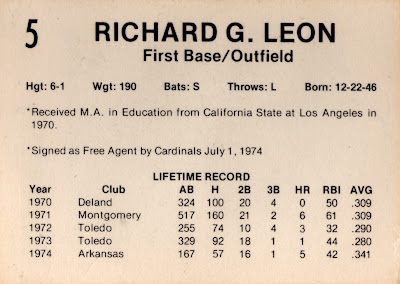 The full set checklist contains 24 cards and a (team photo?) placemat. You can see by Rich Leon's stats that he didn't play in Tulsa until 1975, so I assume set makers snapped photos that spring and distributed it throughout the year. Fan favorite Keith Hernandez doesn't appear, saving some the headache of tracking down a rare issue. (St. Louis Cardinal collectors, on the other hand, might want the manager card of Ken Boyer.)