Most consider the late 1960s a low-offense era, with high pitching mounds and tiny ERAs. Few of baseball's best sluggers cleared 40 homers, and no one in either circuit hit 50+ between 1965 and 1977. Today's card pictures the only National Leaguers with at least 30 in 1967. 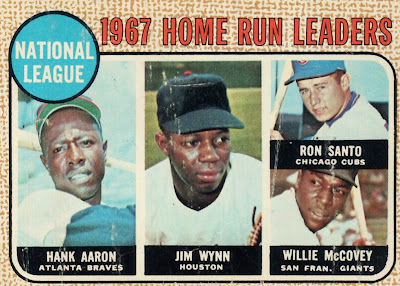 Card front
Top-shelf third baseman (and all-time Chicagoan) Santo passed away this week after a lengthy battle with diabetes. He left behind many fans, if not quite enough HOF voters to reach Cooperstown during his lifetime. Supporters of Ron's candidacy prominently point to years like 1967, when he led the NL in both offensive and defensive Wins Above Replacement by nearly two full games, standings at B-R.com. (For comparison, Albert Pujols is the senior circuit's most recent player to lead both WAR categories.) 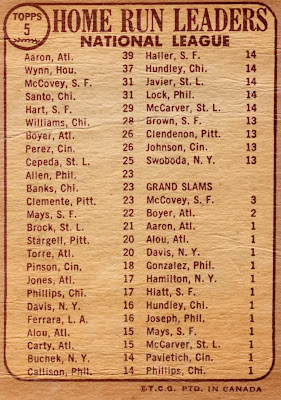 Card back
O-Pee-Chee reprinted Topps' first 196 cards as their 1968 set, similar to other limited runs earlier in the decade. That makes the #177 Koosman / Ryan RC its most valuable card by far and a tough find for Mets or Nolan Ryan collectors. Backs use muted colors and say "PTD. IN CANADA."

Value: League leaders aren't impossible to find--I picked up this #5 for $10 on eBay--but completing a 1968 set would be tough work.