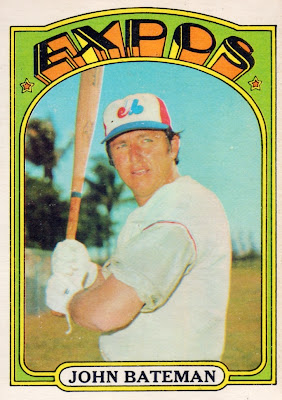 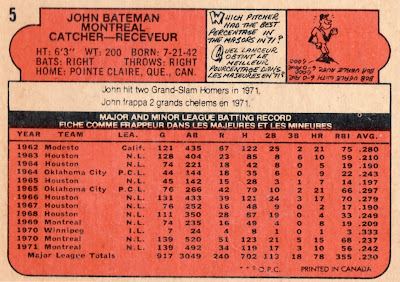 Card back
In Dec 2010, Baseball-Reference.com posted a fun article called "How many clicks to Babe Ruth?" (If you haven't seen their player stat pages before, each and every one features a Top 10 Similar Batters list, helping us understand how that guy performed relative to others, independent of year.) The "how many clicks" idea is like Six Degrees of Kevin Bacon for baseball: start with any player and follow Similarity Score links until you reach Babe Ruth. (Hank Aaron and other historic sluggers are one step away.)

One B-R submitter said he's never failed in linking a player to Ruth, though it can take dozens of in-betweens. Unfortunately, medium-power, low-average catchers like Bateman seem to be their own world and it's tough to break out to other, higher-performing positions. (I reached the underrated 60s backstop John Romano quickly, but stalled out getting any closer.) Have you successfully linked a favorite player to the Babe?